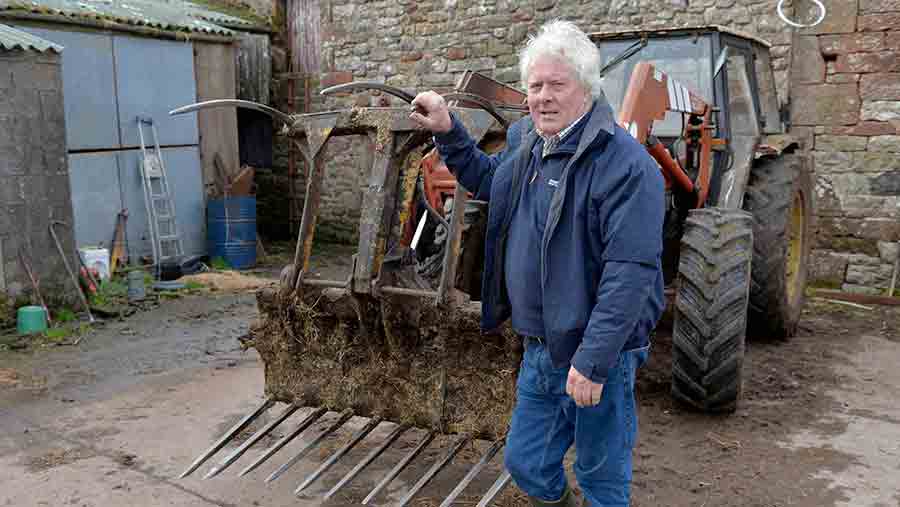 A farmer narrowly cheated death after he was impaled on a metal tractor spike, which punctured his lung and missed his heart by centimetres.

Dennis Bowman, 69, said the freak accident happened while he was working on a tractor at his farm in Cumbria.

The tractor’s heavy metal arm, tipped with three 2ft long metal bale spikes, suddenly collapsed on him, piercing his chest, breaking ribs and puncturing one of his lungs.

The grandfather of nine managed to pull the spike out of his chest and walk 30 yards to his farmhouse to get help – despite the gaping hole in his chest.

A friend then rushed him to a GP’s surgery before an air ambulance took him to hospital.

“I was just doing a bit of maintenance on the tractor, working on my own in the farmyard,” said Mr Bowman, who farms at 65ha Scalehouse Farm near Kirkoswald a few miles from Renwick village, east of Penrith.

“I dropped some fence posts on to the tractor’s loader, and it just tipped over towards me. It just didn’t stop coming. It’s a fairly heavy thing, and it just knocked me down.

“I was down on my knees, and I remember having to push the loader off me, but the spike point still had hold of my clothes. Then I saw the spike coming out of my chest.

“I didn’t know what to think – and I couldn’t work out how it could have happened. There was blood coming out of the hole so I knew it was worse than a sticking plaster job.”

Within minutes, an air ambulance from the Great North Air Ambulance arrived and Mr Bowman was flown to the Royal Victoria Infirmary in Newcastle for specialist treatment. He has now made a full recovery.

Theo Weston, a Penrith-based doctor, said: “I don’t think Dennis realised quite what a close call he has had.

“If the spike had been a millimetre or two either way and had punctured a blood vessel or even his heart, it could have been a completely different story.”