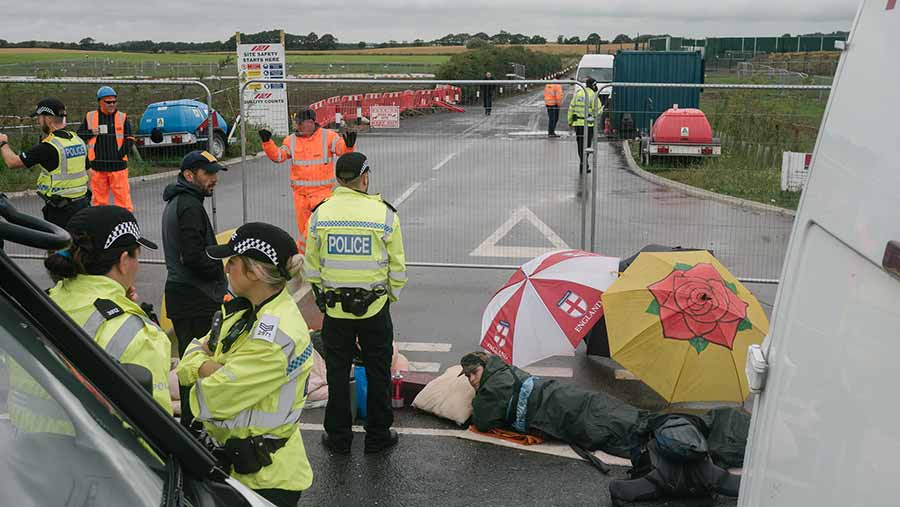 Dozens of farmers and growers from across the UK are demonstrating outside a fracking site in Lancashire against shale gas exploration.

The field was leased to energy firm, Cuadrilla, by farmer Allan Wensley, who says he has no regrets.

The rally is being organised outside energy firm Cuadrilla’s Preston New Road site, near Blackpool, on Friday (21 July). Organiser Reclaim the Power says its activities plan to shut operations on the site for the day.

The demonstration, which is expected to attract about 150 people, is being held to oppose the effect of shale gas exploration on agriculture.

Dairy farmer Andy Pemberton, who runs Lytham’s oldest dairy farm; Melanie Fryer, a small-scale producer on a traditional Dale farm, and a representative from the Landworkers’ Alliance are due to give speeches at the protest.

Alan Schofield, a local organic producer who’s been farming in Pilling, Lancashire, for the past 35 years, will be among those protesting.

“As a Lancashire vegetable farmer whose livelihood depends on the health and well-being of our soils, I am shocked that this development has been allowed,” he said.

“The good people of Lancashire said no to this development, only to be overturned by central government. We are not just fighting an unwanted and highly polluting industry, the whole of our democratic process is at stake.”

Liz Humphrey, from the Landworkers Alliance, added: “The fracking industry’s international legacy in the US and Australia to date is the permanent contamination of fertile land and critical water supplies.

“Livestock are often the first to suffer the effects of air and water pollution, and the standard response to the devastation of herds is denial rather than compensation.”

The protest is part of a “Rolling Resistance” month of action, organised by local campaigners and Reclaim the Power, aiming to disrupt work at Cuadrilla’s site every day in July.

A new survey by YouGov has shown 66% of Lancashire residents oppose fracking near their homes.

Cuadrilla said protesters have a right to protest peacefully, but not to disrupt activities.

Its chief executive, Francis Egan, told the Guardian: “I strongly condemn the increased illegal and aggressive behaviour of activists that has put all road users near our Preston New Road site at serious risk.”