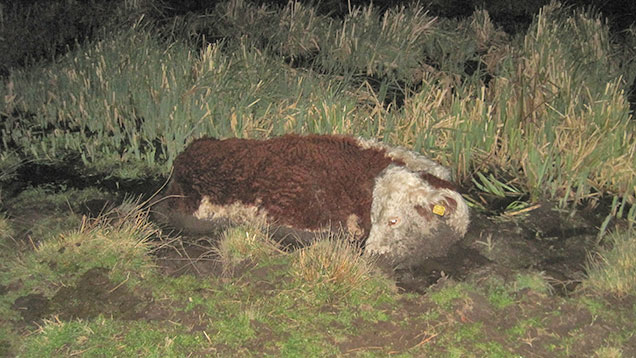 These dramatic pictures show the moment an in-calf cow was rescued from a muddy stream in Worcestershire.

A dog walker alerted emergency services after he spotted the stranded cow marooned in a stream in Ashmoor Common, near Kempsey on Tuesday evening (31 March).

Two fire crews from Worcester, one from Malvern and an animal rescue team from Pershore attended the incident.

The cow was stuck in the river in a field about 1.25 miles from the A38 road. Rescue teams had to negotiate challenging terrain using lamps to reach her while temperatures hovered between 1-2C.

Crews used a Land Rover and an ATV to carry their equipment and reach the cow.

Farmer Chris Gove was eating his dinner in a local restaurant when he was alerted about the incident on his mobile phone. He immediately left his meal to join in the rescue operation.

“Once the Pershore animal rescue crew arrived, they put straps under the cow and it took about one hour to pull her out,” said Cllr Harrison.

“They used ropes attached to a Land Rover to winch the cow out. It was done in a slow, methodical way. Incredibly, the cow remained calm throughout the rescue operation.”

After she was winched out, rescuers wrapped two thermal blankets around the cow to keep her warm. Vets then gave her warm water administered orally through a rubber tube to reheat her body.

“It was done in a slow, methodical way. Incredibly, the cow remained calm throughout the rescue operation.”
Councillor David Harrison

The water first had to be heated on a fire engine and transported across rough terrain to reach the cow.

After a vet checked her over, the cow was returned to Mr Gove, who monitored her condition at regular intervals overnight Tuesday.

The cow was still weak and unable to stand on Wednesday. Vets say she needs rest and are confident she will make a full recovery.

The cow is due to give birth within the next two to three weeks.

George Marshall, group commander of Hereford and Worcester Fire and Rescue Service, said: “The crew worked very closely with a vet and the owners to rescue the animal.

“Crews were committed into the mud and water to position straps around the cow, which was a lengthy and complex task due to the pregnancy and location of the animal.

“Fire crews, under the close guidance of the vet, then used a winch on a Land Rover to pull the cow to safety. Once out of the mud, the cow was wrapped in a thermal space blanket and the vet administered drugs and glucose.

“Thankfully, the cow and her unborn calf survived and I would like to praise the hard work and dedication of fire crews, vet and owners who remained with the cow throughout.”