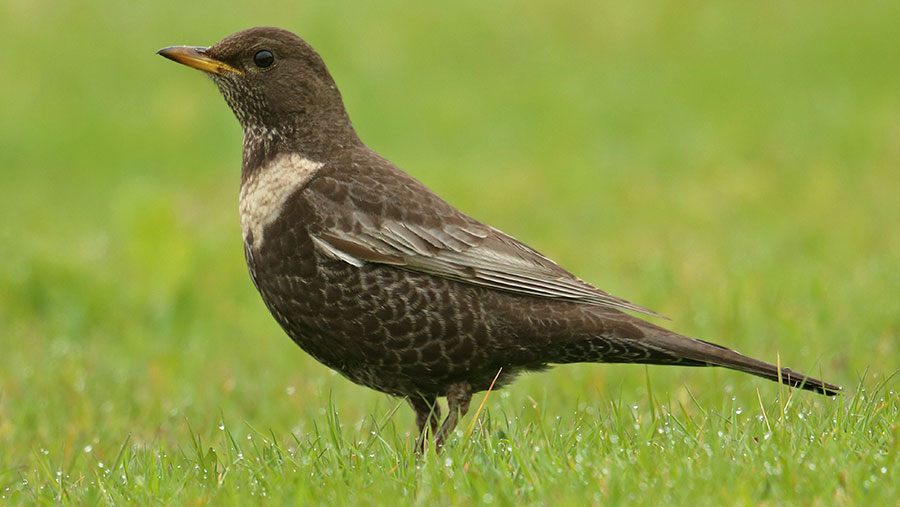 The latest “health check” on the number of farmland birds found record numbers of species were identified on farms this winter.

The third BFBC, organised by the Game and Wildlife Conservation Trust (GWCT), took place between 6 and 14 February 2016.

More than 970 farmers and landowners, who collectively manage 365,000ha across the UK, took a walk around their farm to record the birds and then sent in their results to the GWCT.

Together they recorded 130 species – the best results since the count began in 2014. Last year, 117 different bird types were spotted.

Essex farmer and NFU vice-president Guy Smith recorded 21 species on his farm in St Osyth, including a rare ring ouzel.

He said: “The beauty of the Big Farmland Bird Count is it gives farmers an opportunity to look at all the bird life on their farm, not just the 19 species that the RSPB insist are the total on its Farmland Bird Indicator.

“Most farmers are proud and surprised by the numbers, with some farmers reporting more than 50 species.”

Trust me, one of those dots is a Ring Ouzel. It's not often I say to Mrs.S 'look, there an Ouzel in my paddocks'. pic.twitter.com/tEhTmdKoJq

Ahead of this year’s event, experts from the GWCT and other conservation charities helped some 300 farmers to spot tricky species by sight and sound by holding 17 bird identification days. A downloadable bird ID guide was also produced in partnership with the RSPB.

The BFBC was launched in 2014 to highlight the positive work done by farmers and gamekeepers in helping to reverse the decline in farmland bird numbers by taking out practical measures under agri-environment schemes.

Conservationists have attributed a decline in some of our most cherished farmland birds to the intensification of farming around the mid-1970s, a period which saw an increase in the use of pesticides and fertilisers.

But in recent years, the decline has slowed and some threatened species, such as reed bunting and grey partridge, have actually rebounded. Farmers have played their part by planting plots of seed-rich plants and scatter feeding birds through the “hungry gap” in the winter in an attempt to boost bird populations.

What birds did farmers see?

At the other end of the scale, GWCT said it was “delighted” to see that a total of 25 species from the Red List for Birds of Conservation Concern were recorded.

Of these, six appear in the 25 most commonly seen species list: fieldfares, house sparrows, starlings, yellowhammers, song thrushes and skylarks.

The most abundant of these were the first three, which were seen on more than 35% of the participating farms.

In addition, seven species were recorded during the count for the first time, including a snow bunting.

The five most abundant birds seen were woodpigeons, starlings, rooks, fieldfares and lapwings. A total of 91,513 were found, making up 40% of the total number of birds recorded.

Jim Egan, head of development at the GWCT’s Allerton Project, said: “It is interesting to note that this top-five list is almost the same as for the 2014 and 2015 counts.

“The only difference for this year is that lapwings have appeared, pushing chaffinches down to sixth place.”

As with last year, seven of the top 25 most abundant species are on the Red List for Birds of Conservation Concern: linnets, yellowhammers, house sparrows, starlings, lapwings, fieldfares and redwings.

The average farm size of those taking part was 373ha, with more than 60% growing arable crops, more than 50% having beef or sheep, and more than 10% growing field vegetables. A number of dairy farms, horticulture units, poultry producers and pig producers also submitted counts.

More than 60% of participants were in some form of agri-environment scheme, demonstrating their long-term commitment to environmental management.

More than 50% of participants were providing some form of extra seed feed for birds, either through growing wild bird seed mixes, or by providing additional grain through scatter feeding or via hoppers.

Where did people count?

Most survey sites were next to winter cereals, grassland or overwintered stubbles. The features recorded are a good demonstration of the variety of habitats present in farmland across the UK.

The Big Farmland Bird Count is sponsored by BASF and delivered in partnership with the Farming and Wildlife Advisory Group, Linking Environment and Farming, the CLA and the NFU.

The next Big Farmland Bird Count will take place between 4 and 12 February 2017. For details visit the GWCT’s website.