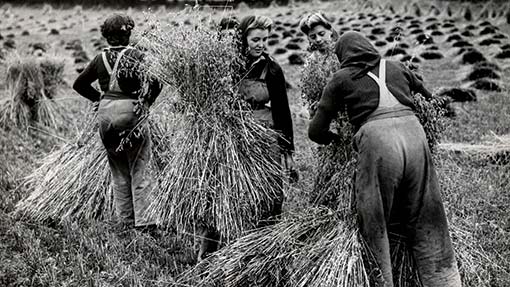 The war years brought a new status to farming and food production after years in the doldrums, but Farmers Weekly in the 1940s reflected a healthy scepticism in the industry over the government’s warm words about the importance of the sector.

“Farmers may in fact be forgiven if they are still somewhat sceptical of some of the professions of everlasting care, and wonder if it is anything more than cupboard love, liable to wonder again as soon as other cupboards are again opened,” wrote the editor in January 1940.

The big push from the Ministry of Agriculture was to get derelict land brought back into cultivation and legislation was introduced to offer 50% grants for drainage so every acre could contribute to the war effort.

Livestock farmers were also told their land must feed their own stock because of severe shortages of bought-in feed. This led to a massive campaign to convert farmers to the merits of silage rather than hay.

The shortage of labour was a recurrent issue, because of a lack of active, able-bodied men who had not been called up for military service. Italian prisoners of war were the answer for some, for others it was women. 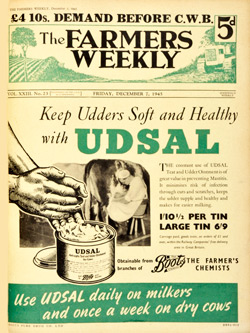 But this was not without controversy – it was clear there was a reluctance to employ women in jobs more traditionally done by men. However, by 1941 the situation was so serious that any prejudices had to be put aside.

“The full employment of the Women’s Land Army is the only substantial answer to the farmers’ call for more labour,” we wrote. “Farmers must heed that answer. It is the only way out.”

A letter sent to the chairman of all the County War Agricultural Committees, telling them that they must not criticise the government’s agricultural policy in public, sparked a storm of protest in 1940.

Farmers had been arguing that it was ludicrous they were not allowed to watch their animals being slaughtered or ask the weight of an animal when it was killed because of absurd secrecy rules. The letter which followed – dubbed “the hush hush” letter – led to a debate about petty bureaucracy.

One farmer said: “We are not fighting a big Hitler on the Rhine to set up a whole army of little Hitlers here.”

The thousands of women and children evacuated from the towns and the cities to the countryside prompted a novel Farmers Weekly competition in 1941. The Home Section of the magazine asked for ideas on how evacuees “might be brought into a useful relationship with country and farming life”.

Post-war, farmers might have been hoping some of the pressures they faced would recede, but with the country teetering on bankruptcy and appalling snow and flooding in 1947 there was little respite.

The Agriculture Act of 1947 which offered guaranteed prices and assured markets for farmers’ produce was the government’s answer, although at the time farmers were left less than impressed with the reality. 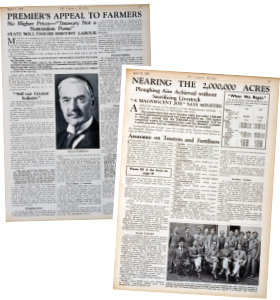 Music while you plough

It was clearly a tough time. But there were lighter moments. In 1945, young farmers from New Zealand came up with a list of ideas to help cheer up their “negative-minded elders”. These included: listening to music while ploughing, taking up golf and learning semaphore so that signals can be made across a field in a way that “saves tempers and many working hours”.

It was obviously a time before hand gestures across fields became something that caused arguments, rather than avoided them.