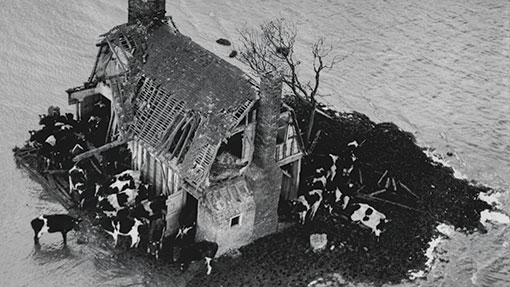 By the 1950s, the tractor was readily replacing the horse when it came to farm work. Adverts for Case, Ferguson, International and JCB abound, as well as less familiar brands such as Turner and Monarch.

A Claas self-propelled combine harvester, for example, could be bought for £2,300 – available with either eight, 10 or 12ft cutter bars and a built-in baler.

New husbandry techniques were also emerging. The first National Weed Control Conference was held in 1953 as chemical weedkillers started to gain popularity. The problems of spray drift, the need for a performance test for sprayers and application techniques were all discussed – topics still debated 60 years on. As the decade progressed, the idea of aerial spraying also became appealing and hundreds of farmers turned up to attend demonstrations of aircraft in action.

In fact, it was a time of experimentation in every way. In 1959 we featured a farmer who had taken to using explosives to clear his ditches rather than dig them out by hand. The sheep industry was also trialling hormones to see if they could get two crops of lambs a year.

Radioactive dust which leaked from the nuclear reactor at the Windscale plant in Cumberland led to milk being poured into the sea within a 200-mile radius and urgent blood and soil tests were ordered to assess levels of radioactivity. Up to 25,000 gallons of milk a day were dumped because of fears that Strontium-90 was among the contaminants released into the atmosphere. Farmers in the area were stoic, talking about how “teething problems” with the plant were inevitable. But they were still left puzzled at ministry advice that their stock was not contaminated by the leak even though the milk they produced seemingly was.

As beef farmers looked to become more efficient, they started to turn their attention away from native breeds towards alternative Continental breeds which might give them better returns. “We should try the Charollais” was the verdict of the then chairman of the British Cattle Breeders Club after a visit to France in 1958. “I have never seen cattle stand with such muscled thighs, giving the impression of lots of meat,” he said. But it was a view that sparked controversy and was initially blocked by the Ministry of Agriculture because of concerns over the disease risk. It was not until 1959 that Charollais genetics (renamed Charolais in 1962) actually reached British shores when they were smuggled in using a vacuum flask.

After 14 years of state control the farming industry finally got a taste of freedom. In November 1953 the government issued a White Paper which outlined plans for the decontrol of the marketing, distribution and selling prices of farm commodities.

The move tied in with the phasing out of food rationing which finally came to an end in 1954. By that year the Milk Marketing Board had been reintroduced and the private trading of livestock and meat restored.

To protect farmers, a series of price support schemes were also introduced. For example, if stock did not make the guaranteed price when sold in the auction market, the government paid a top-up payment.

However, the opening up of markets generated concerns over the level of imports.

Unrestricted imports – in particular of pigmeat – were blamed as the “prime cause of instability in the farming industry”.