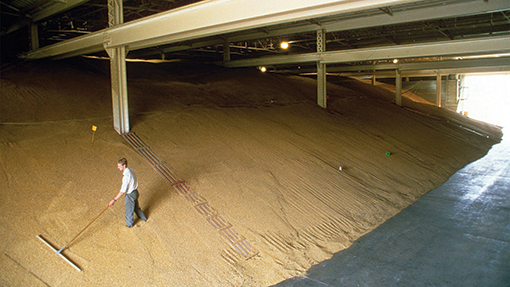 Perfect weather in 1984 resulted in the biggest yields of wheat in British farming history. Sheds, bins and silos were bursting with the record crop as farmers all over the country reported massive yields.

Coupled with good prices for wheat, which was trading at about £125/t, the harvest led to a more positive outlook within farming and predictions for further increases throughout the decade.

More than 170m tonnes of grain were produced in Europe in 1984, with wheat production levels specifically increasing from 40m tonnes in  1970 to 60m tonnes. For the next three years, until 1987, world production of wheat exceeded consumption.

Junior health minister Edwina Currie caused uproar on 3 December 1988 when she announced on ITN that “most of the egg production in this country, sadly, is now infected with salmonella”. Within weeks, egg sales had collapsed by 50%, four million hens had been culled and 400m eggs had been destroyed.

The poultry industry was devastated as the British public completely lost faith in the safety of British eggs.

While salmonella was a growing problem in the UK at the time, critics claim that Ms Currie’s statement was exaggerated and sent the country into unnecessary panic.

At the time of her statement, just 26 cases of food poisoning caused by eggs had been confirmed, placing the chances of infection in humans at one in 200m.

A new ministry code of practice was put into place to deal with salmonella, but the damage to egg producers had already been done.

Surplus:  the story of the decade

After the 1984 boom in grain yields, high production levels became problematic. Farmers were not only getting better at growing crops but the CAP system of intervention payments gave  farmers a financial incentive to keep producing, regardless of market conditions.

As intervention stores filled up it became an uncomfortable moment for the farming industry, which was looking at EEC grain stores bulging with their surpluses while newsreels were playing out on the TV of Ethiopians dying of malnutrition.

In response Cambridgeshire farmer Oliver Walston set up Send a Tonne to Africa campaign which after a shaky start gained real traction. The first load of grain from UK farms actually arrived in Port Sudan before Bob Geldof had even thought of Band Aid and by the time the appeal ended a year later, British farmers had shipped 12,000t of wheat to Ethiopia to help with the famine relief effort.

By the end of the 1980s, production and consumption levels were reasonably equal which provided respite from overproduction, but not enough to salvage real income levels, which had fallen dramatically since 1984.

Milk quotas were introduced virtually overnight in 1984 to bring rising milk production in Europe under control. The argument was that with a milk market overhang of more than 10m tonnes in the early 1980s action was essential.

Quotas meant the amount of milk that a farmer could sell every year was capped for the first time and producers were charged a superlevy for any overproduction.

There were huge consequences for farmers, many of whom had to significantly cut costs in order to maintain profit. Many reduced their herd numbers or sold part of their quota to fellow farmers.