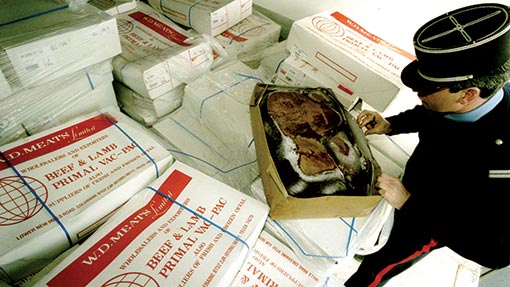 The first case of bovine spongiform encephalopathy (BSE), dubbed mad cow disease by the mainstream press, was actually confirmed in 1986. However, it was the 1990s when the full weight of the disease was felt by the industry.


As consumer confidence dipped in May 1990, John Gummer – then agriculture minister in the Conservative government – tucked into a beefburger alongside his four-year-old daughter Cordelia (pictured with Mr Gummer below) in an attempt to demonstrate his faith in the beef industry.


However, by March 1996 the UK government had been forced to announce that there was a link between BSE and human disease Creutzfeldt-Jakob disease (vCJD) – resulting in a worldwide ban on British beef exports within days.


The financial implications for the beef sector were huge, particularly when combined with high interest rates and a strong pound, and were a driving factor in the campaign to “Keep Britain Farming” and large protests at the Labour Party Conferences of 1998 and 1999.

Beef on the bone

Prince Charles hit the headlines in May 1999 after he ignored the controversial beef-on-the-bone ban by sampling some beef during a Royal visit to Wales. He described it as “absolutely delicious” and was hailed as a hero by farmers, who believed that the ban, which stopped T-bone steaks or ribs of beef from being sold, was completely ludicrous. The export ban was eased in August 1999, but it took until 2006 – 10 years after the BSE crisis really took hold – for it to be lifted completely. 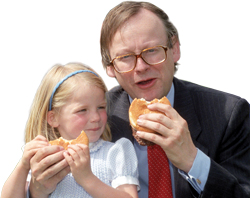 The MacSharry reforms of the CAP in 1992 saw the introduction of the new IACS scheme and set-aside become compulsory for arable farmers.


Originally growers had to leave aside 15% of their land, with the policy reduced to 10% in 1996 and abolished completely by 2008.


The aim of the introduction of set-aside was twofold: to help reduce the large, costly surpluses produced in Europe under the old guaranteed price system of the CAP and to provide environmental benefits.


For the first time farmers were given direct payments which related to the acreage of the different crop types they were growing.

Environmental issues were starting to creep up the policy agenda more generally. The Countryside Stewardship Scheme was introduced as a pilot in England in 1991 with the aim of getting farmers and other land managers to enhance and conserve English landscapes, their wildlife and history – and to help people enjoy them.


The government also banned stubble burning in 1993 after concerns over its environmental impact and calls from the public to end the controversial practice.


In addition, the Hedgerow Regulations Act took effect on 1 June 1997, making it illegal to remove or destroy certain hedgerows without permission from the local planning authority.

Highs and lows for arable farmers

The 1990s was a roller-coaster decade for arable growers. It started off promisingly with a weak pound helping exports and there was great fanfare in 1996 as a new group of fungicides – strobilurins – were launched, claiming to boost wheat production and offer superior disease control – which they did. However, the yield benefits of were relatively quickly overshadowed as powdery mildew and then septoria developed resistance.


In 1997 the Assured Combinable Crops Scheme was introduced much to the dismay of some smaller producers. Grain prices were also on the slide, reaching less than £65/t in July 1998, the lowest they’d been in at least 20 years.

The first GM crop went on commercial sale in 1994, when Calgene marketed its Flavr Savr delayed ripening tomato. A variety of the tomato was used to make tomato purée that was sold in Europe in the mid-1990s, before huge controversy erupted over GM crops, dubbed “Frankenstein foods” by some parts of the media.


Since their introduction, there has been consistent opposition to GM crops from some MPs, businesses and consumers, who raise environmental and safety concerns. Yet proponents of the technology point out that an estimated three trillion meals containing GM ingredients have been eaten around the world since 1996, without proof of a single case of ill-health.