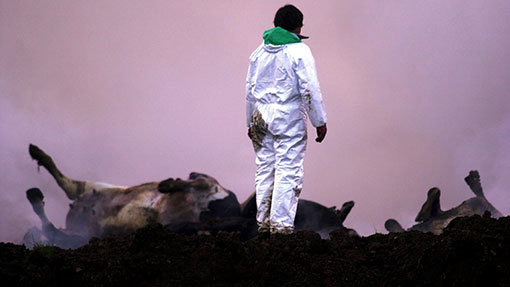 News of the first foot-and-mouth outbreak since 1967 was a watershed moment in farming history. The disease, first identified in pigs at an abattoir in Essex in February 2001, shaped the decade in many ways. It left a trail of financial and emotional devastation in its wake and led to the destruction of millions of cattle and sheep.

Warnings in Farmers Weekly during the early weeks of the crisis that the disease might have “a bigger impact on Britain’s economy than the BSE crisis” appeared to be horribly close to the truth.

Over the next few months we reported farmers’ despair, the decimation of the rural tourism industry and the postponement of the general election, along with major sporting events such as the Cheltenham Festival.

In a bid to get ahead of the disease the government was forced to call in the help of the Army and then implement a controversial policy of culling any animals within a certain radius of a confirmed outbreak. This led to a fierce row over whether vaccination or culling was the best approach to get on top of the disease.

The march of the disease – which played out on TV for months in the form of pictures of burning pyres of animals – was finally halted in October 2001. Its estimated cost to the UK was £8bn.

Horrifyingly, foot-and-mouth returned in August 2007 and the industry was left incredulous after a government-funded laboratory was found to be the source of the outbreak.

A poorly maintained drainage system was found to be to be to blame for the release of the virus back into British countryside.

The decade began with the formation of the People’s Fuel Lobby, which launched a series of protests to press the government for tax concessions as fuel costs rose rapidly.

As world oil prices rocketed, the government was held responsible by angry farmers for unfair taxation on fuel. The estimate at the time was that the government had gained £4bn/year due to its “scandalously high rate of fuel taxation”.

On 7 September 2001 the Farmers For Action group – led by chairman David Handley – joined Welsh farmers in a blockade of the Shell Stanlow oil refinery in Cheshire.

Within 100 hours they had completely shut off Britain’s fuel supply and forced the then chancellor, Gordon Brown, to pledge to freeze fuel duty and scrap excise duty for farm vehicles.

Plans to reform the CAP were first announced by European farm commissioner Franz Fischler in January 2003, with NFU president Ben Gill labelling them “potentially the most divisive set of proposals” UK farmers had ever faced.

By July 2003, EU ministers had agreed farmers should concentrate on producing food according to what the market demanded, rather than maximising aid. But it was in the implementation phase where things really started to go wrong.

While Wales, Scotland and Northern Ireland all decided to base their new payment systems on historic payments, England decided to go its own way with disastrous consequences.

The rollout of the new Single Payments Scheme dominated the headlines during 2005 and 2006 as Farmers Weekly reported on an unfolding disaster at the Rural Payments Agency. Farmers in England were forced to wait for months for their single farm payments thanks to a combination of mapping problems, organisational chaos and computer failures.

By March 2006 farmers were threatening public protests to highlight their plight and push the government into action.

The sense of despair was summed up by a farmer who wrote: “Farmers are going to crash and burn because of government incompetence, arrogance and total indifference to the plight of many decent people. I think many are at their wits’ end.”

Wheat prices rose to £182/t in March 2008 as food prices peaked across the world.

World wheat and rice prices almost doubled between mid-2005 and March 2008, causing political unrest in some countries. The volatility brought food security back into focus in many developed countries where it had not been an issue for decades. High oil prices, panic food buying and export restrictions all played a part in the food price shock.