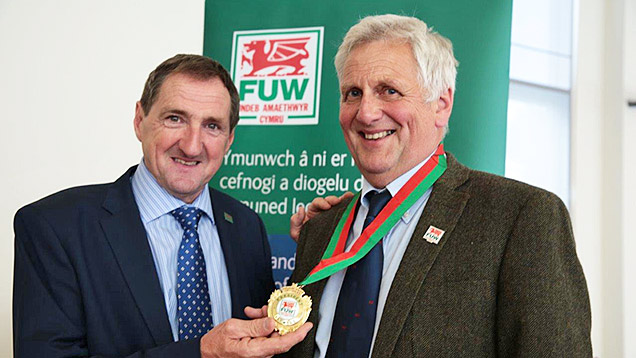 Glyn Roberts has been elected as president of the Farmer’s Union of Wales, replacing Emyr Jones who has stepped down after four years in the role.

Mr Roberts of Dylasau Uchaf, Padog, Betws-Y-Coed, Conwy, makes the step up from deputy president of the organisation.

He was elected during a meeting of the FUW grand council in Aberystwyth, after Mr Jones revealed his decision to step down after 15 years’ of loyal service to the union.

See also: Emyr Jones steps down as president of Farmers Union of Wales

Mr Jones told members it was time he “took a back seat” and allowed the union to be led by a new face.

Talking after his election, Mr Roberts said he wanted to thank everyone who had voted for him.

“We are indebted to our former president Emyr Jones for his leadership over the past four years and as we celebrate 60 years of fighting for family farms, I look forward to pro-actively continuing in the footsteps of my predecessors.

“As president of this union I want to see the opportunities in problems rather than see problems in opportunities and would like to further a sustainable agricultural community which continues to be the backbone of our rural economies and culture.”

Mr Roberts is a first-generation farmer who originally worked as a shepherd after completing a full-time course at Glynllifon.

He is a tenant on a 140ha farm, owned by the National Trust, which he has run with his wife Eleri since 1983. The couple have five children – three of which have graduated from Aberystwyth University and two of whom are students there now.

Mr Roberts has previously been on the FUW finance and organisation committee, FUW vice-president from 2004-2011 and was elected as deputy president in 2011.