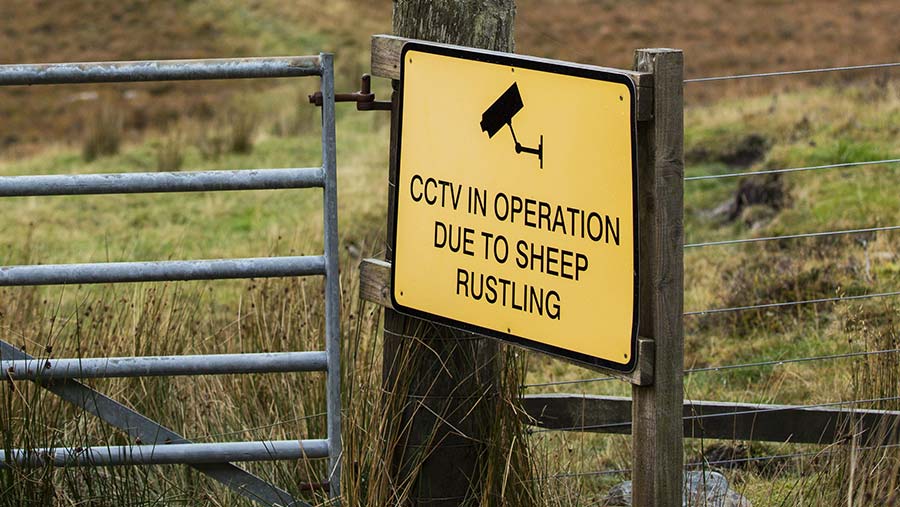 A Farmers Weekly investigation has exposed the chronic failure of police forces to tackle sheep rustling.

A Freedom of Information (FoI) request for crime statistics held by all police forces in the UK has revealed that the problem is being ignored.

We requested data on the number of reported thefts of sheep made to each of the 45 forces in the UK between April 2012 and April 2017.

Thirty-one forces could provide data, including three from Wales. However, the Police Service of Northern Ireland and Police Scotland could not provide any information because it would take too much police time.

In total, there were 1,203 incidents of sheep rustling reported over the five-year period – which is the equivalent of 4.62 incidents every week.

Cumbria Constabulary recorded 262 incidents over this period, the highest of all forces, followed by West Mercia Police and Devon and Cornwall Police with 130 and 122 cases, respectively. North Wales Police recorded 67 cases, and South Wales Police 42.

Despite hundreds of sheep rustling incidents reported across the UK, just nine of these cases resulted in a conviction.

However, it is important not to place the blame entirely on the police. Our investigation uncovered examples of farmers offering vague scraps of information on the incident, often long after the theft was likely to have occurred.

This is a typical example of a reported crime: “Unknown person/persons have entered a field and removed two lambs from the field, making off by unknown means in unknown direction.”

He insists that sheep rustling is seriously under-reported. The only people likely to report cases are the ones with insurance policies making claims, but a third of farmers are estimated to not have cover.

Mr Price says that while NFU Mutual claims that statistics show sheep rustling cost UK farmers £2.2m in 2016, the true cost is likely to be far higher – as much as £6m.

According to Mr Price, sheep rustling has always been a persistent problem for farmers. However, since 2011 the insurer has seen a worrying trend for rustlers taking more sheep at a time, sometimes more than 100 in a single theft.

“British farmers have always had to contend with rustling – but until five years ago we rarely saw claims for more than a dozen being stolen in one go,” he says.

“Now we are regularly seeing claims for 50 or more sheep – and some thefts of over 100 sheep taken in one raid.”

Some farmers have resorted to unusual tactics to prevent sheep rustling. For example Devon sheep producer John Heard dip-dyed 250 blackface ewes orange after 200 of his flock vanished from Dartmoor in just a few years. 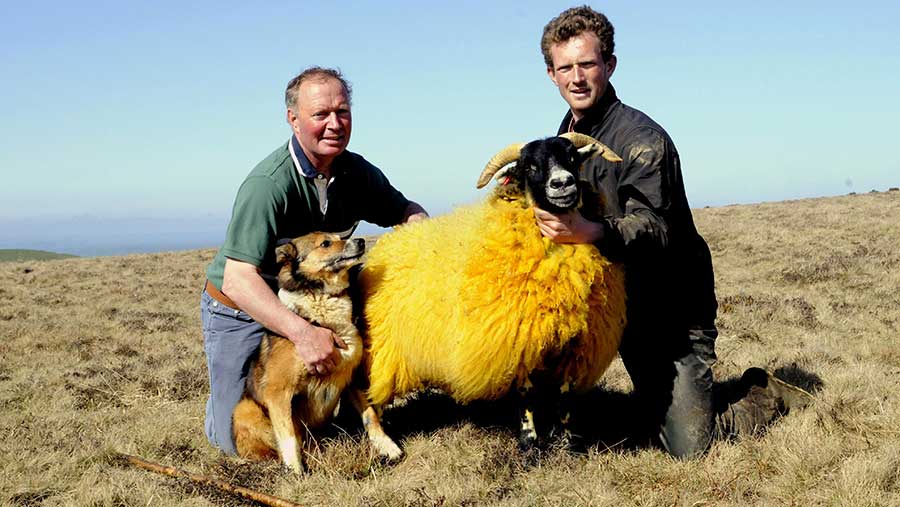 Devon farmer John Heard and his son James with one of the 250 blackface ewes dip-dyed orange to deter thieves after 200 vanished while gazing on Dartmoor © REX/Shutterstock.

What happens to the stolen sheep?

Most stolen animals are thought to enter the food chain illegally, or are slaughtered through legal routes on false ear tags in the days immediately following the theft.

As prosecutions rely entirely on evidence being recovered, and in both of these scenarios the evidence will have been eaten, Mr Price says a conviction is virtually impossible.

But in the rare cases where stolen sheep are identified alive, a big step forward in bringing a prosecution with the help of DNA testing has been made thanks to Lancashire farmer John Taylor.

When sheep stolen from his farm were located through social media, police did not know how or where to keep the suspect sheep while the investigation proceeded.

The solution was to keep them safe on a neighbouring farm as evidence for the duration of the case, while not subjecting the holding farm to undue movement restrictions.

This has evolved through the help of the NFU and NFU Mutual into the Lancashire Livestock Initiative – a network of farmers and auctions that can assist police when suspect sheep are located by sheltering them in “Ewe Hostels”.

Similar networks are now being rolled out across the country.

DNA testing was also key to solving a high-profile case in Wales earlier this year. A flock of 50 missing sheep were identified by the Dyfed-Powys Police at the local market two weeks after they vanished.

As the sheep were in lamb when they were taken, DNA testing was able to link them back to rams still owned by the farmer.

DNA testing will used in any similar cases in the future, increasing the likelihood of a conviction.

NFU Mutual’s local agent in Appleby, Amanda Wallbank, has been instrumental in setting up Countrywatch Eden, a scheme in Cumbria that has linked sheep farmers with police.

“If police saw a sheep trailer at an odd time they wouldn’t have known that they should be suspicious, but now they know that they should ask for things such as movement documents,” Ms Wallbank says.

Although police have yet to actively intercept any stolen sheep in the field, the scheme is proving to be an effective deterrent.

It has also had the benefit of proving to farmers that police will take the matter seriously, which Mrs Wallbank hopes will help to encourage more farmers to report missing sheep.

“Some farmers will have 15-20 sheep missing every year and won’t report it. There was a lot of distrust between farmers and police, but now when two or three of the police officers go to the auctions, farmers will go up and have a chat, so that’s changed.”

The scheme’s Facebook page publicises incidences of sheep theft, but Mrs Wallbank says more education of farmers is needed for such tools and the police to actually be effective.

“A farmer who gathers in his flock from the hills and finds 50 are missing wont report it until all his neighbours have gathered theirs in – that can be two weeks later.”

By then there is nothing the Facebook page, or the police, can really do.

Having seen the results in Eden, Cumbria police are now rolling out similar schemes across the county.

Phil Stocker, chief executive of the National Sheep Association, says many farmers do not want to reveal that they fail to notice large numbers of sheep disappearing from their farms.

But he said farmers must overcome this fear of embarrassment if police are to dedicate more resources towards tackling the problem.

“Unless people report it, it is impossible to get a handle on what’s going on,” says Mr Stocker. “It can be difficult to report when you don’t have the answers, but it’s crucial farmers do.”

Often cases involve people with a knowledge of farming, he adds.

Despite fears criminals will merely be pushed to other areas there are no plans for a joined-up national scheme.

Technology of the future

Technology could be the answer to securing more prosecutions in the future.

“New technology could be really valuable, but out of the reach financially for a lot of commercial farmers,” says Mr Stocker. “Hopefully uptake would bring down the cost to an acceptable level.”