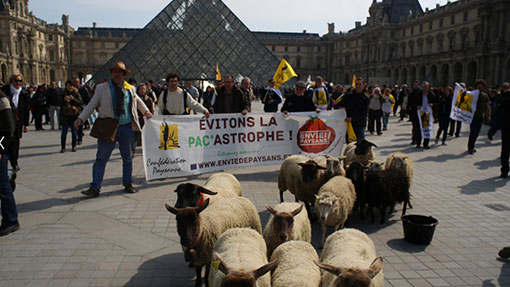 A dozen sheep were let loose in the iconic Louvre museum in Paris amid protests against cuts to farm subsidies.

French farmers said they did not want farming to “end up in the museum” during a protest against reforms to the EU Common Agricultural Policy (CAP).

About 50 protesters from Confédération Paysanne (Farmers’ Federation), an agricultural union that promotes organic farming and is opposed to large-scale agricultural production, led the demonstration on Friday (28 March).

Tourists and museum staff were left stunned as the protesters herded the sheep into an exhibition hall in the world-famous museum, which is home to Leonardo da Vinci’s Mona Lisa and Michelangelo Carrivaggio’s The Fortune Teller.

The union is angry about proposed cuts to the CAP, which it says will unfairly penalise the small farmer and favour large agribusinesses and “industrialised agriculture”. 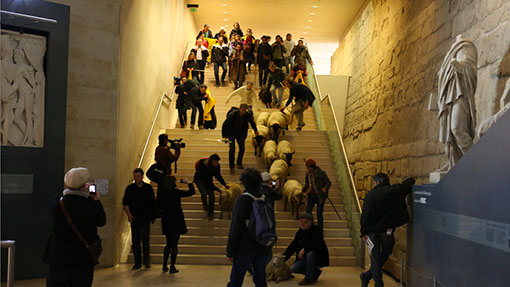 Laurent Pinatel, spokesman for the Farmers’ Federation, said: “We demand a policy that is fair for all farmers, for quality food for the life of the regions, for our environment.

“We won’t be mothballed. We will continue to fight for small farmers, for an agriculture for all.”

On Tuesday (1 April) the French Ministry of Agriculture will meet with farming groups to decide the final decisions for applying EU legislation to the CAP in France for the next seven years.