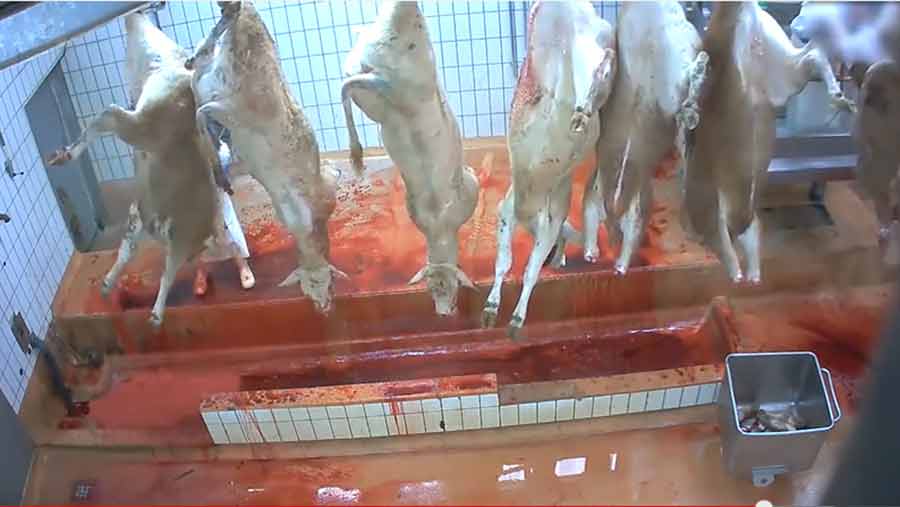 French authorities have launched an inquiry into all of its abattoirs after shocking video footage emerged showing cruelty to sheep and cows.

Animal rights group L214 released a video of workers mistreating animals at an abattoir in the Pyrénées-Atlantiques area in south-west France just before Easter.

Hidden cameras revealed lambs being hit with objects when they have not been stunned and then bled while still showing signs of consciousness.

See also: CCTV in all slaughterhouses – 100 MPs back campaign

Some lambs are suspended and quartered and have their throats slit while they are still clearly conscious.

Operators were also filmed giving electric shocks to calves to prod them on their way, including to prohibited body parts such as the head.

Calves are pushed two or three in a box meant for a single animal, causing calves stress as they trample on each other.

Many calves and adult cattle are raised and bled without being stunned effectively.

“These are obviously some very shocking images, but they’re not the first of their kind, unfortunately,” L214 spokesman Sébastien Arsac told French news website The Local, referring to two similar videos released in the last six months.

Following the release of the video footage on Tuesday (29 March), French agriculture minister Stephane Le Foll ordered the immediate suspension of the activities of the abattoir.

The minister said he condemned the mistreatment of animals “in the strongest terms”, adding that the protection of animals remains a “priority”.

He ordered an inspection of all abattoirs in France “within a month”. The results will be reported back to French parliament and he warned the ministry may take new measures to ensure abattoir workers act responsibly.

France has 263 abattoirs used for the slaughter of cattle, sheep, pigs, goats and horses with an annual production of more than 305m tonnes of meat.

In the UK, animal welfare charities including the RSPCA believe that CCTV should be a compulsory requirement in all abattoirs across the UK as a tool to improve animal welfare.