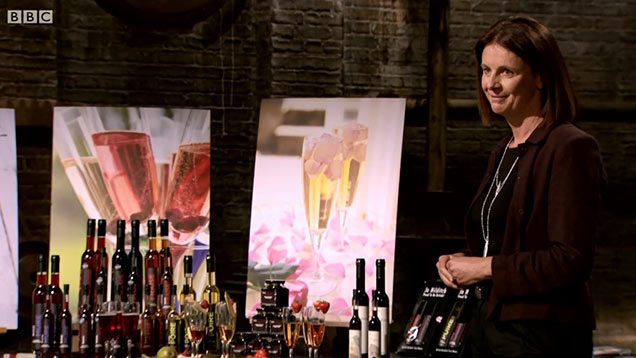 A Herefordshire fruit farmer has turned down offers of investment from two of the entrepreneurs on the BBC’s Dragons’ Den.

Jo Hilditch pitched her business – producing a British version of the blackcurrant-based mixer drink cassis – on a show screened on Sunday (30 August).

She told the Dragons she came up with the idea of creating the original British Cassis alcoholic mixer after spending 10 years running her family’s large agribusiness in Herefordshire.

The main business produces cider apples for Heinken, blackcurrants to make Ribena and six million broilers for Cargill each year.

Mrs Hilditch said she was inspired to create a modern twist on the traditional French liqueur crème de cassis after she wondered what to do with a surplus in the blackcurrant crop.

By using methods similar to wine production rather than distillation, she created a fruity and fresh British alternative – British Cassis.

Peter Jones noted that given she already ran a successful business, she was after the Dragons’ expertise – more than their money – to develop her sideline drinks enterprise.

He offered her the full amount she was asking for in exchange for 30% of the business.

Sarah Willingham said she had an “extremely good product’ and offered her all of the money for a 40% stake.

She also said that when the turnover of the business doubled she would also allow Mrs Hilditch to buy back 20% of the shares at cost price.

But Mrs Hilditch told the Dragons that she had been advised by her accountant not to give away more than 25% of her business and in her own mind the limit was actually 20%.

After realising that neither Dragon was prepared to negotiate further, she declined both their offers.

Speaking to Farmers Weekly afterwards, Mrs Hilditch said the process had been enjoyable, but she had no regrets about the decision she had made.

“I think it has given me wonderful publicity and an opportunity. We’ve had hundreds of orders over the weekend.”