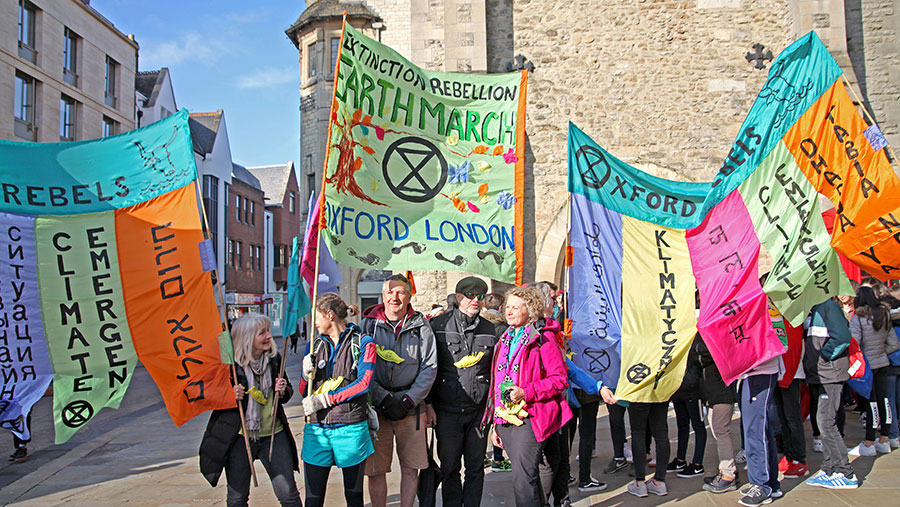 If nothing else, the presence of campaign group Extinction Rebellion at next week’s Oxford Farming Conference will bring a splash of colour to the annual curtain raiser to the farming year.

The group says it is only there to carry out “peaceful actions” around the city. But there is no doubt that the planned demonstrations will be causing headaches for the conference organisers and the local police – even more so if they start gluing themselves to the ancient portals.

See also: FW’s Arable Horizons video on making the most of climate change

But Extinction Rebellion Oxford (XRO) will also be bringing a serious message to the event. It is a message that conference delegates and farmers everywhere are well aware of – that farming systems need to change to help combat global warming.

Yes, there are still a few climate change deniers to be found. But the vast majority accept that rising temperatures and melting ice caps are for real.

Serious action is going to be needed across all parts of society in the coming years if the long-term sustainability of the planet, and the human population that lives on it, are to be secured.

To some extent, XRO are preaching to the converted. Farmers are probably more aware of the consequences of climate change than any other group.

As our exclusive survey in this week’s news section confirms, extreme weather events are on the increase, with more than 80% of farmers saying they have been adversely affected by drought, high temperatures, flooding and/or intense rainfall.

The costs for farmers are considerable – more than £50,000 on average, according to our survey respondents – as they grapple with issues such as poor crop establishment, difficult harvests, reduced yields, new pests and diseases, wind and flood damage, and extra feed costs.

Encouragingly, about one-third of those surveyed said they were already taking steps to mitigate the effects, such as changing cropping patterns, investing in better machinery to “get the job done quicker”, changing their livestock buying strategies or increasing their housing capacity.

But, as well as protecting their own businesses, farmers will be expected to take further steps to counter climate change in future.

It is becoming clichéd to say that farmers can be part of the solution – but given the fact they cover 70% of the UK’s land mass, the statement is indisputable.

The question is how best to effect that change. For no matter how defensive some farmers might be about their tried-and-tested methods, most accept that change is necessary.

The answer may lie in the upcoming Agriculture Bill, which the new government is keen to press on with this year.

There has already been much talk about farmers being paid in future for the provision of public goods – and climate change is at or near the top of that list.

The kind of land and livestock management changes that will be required to reduce farming’s greenhouse gas emissions – such as increased tree and hedgerow planting, better soil and slurry management, and changes to ruminant diets to cut methane production – are well understood.

But putting that all into practice will require clear direction and support from government, with proper advice, accessible schemes and meaningful financial incentives.

Furthermore, despite the NFU’s proactive approach with its “net zero carbon emissions by 2040” objective, farmers must not be expected to shoulder all the responsibility.

They may be an easy target, but global warming affects everyone, so every sector needs to play its part.