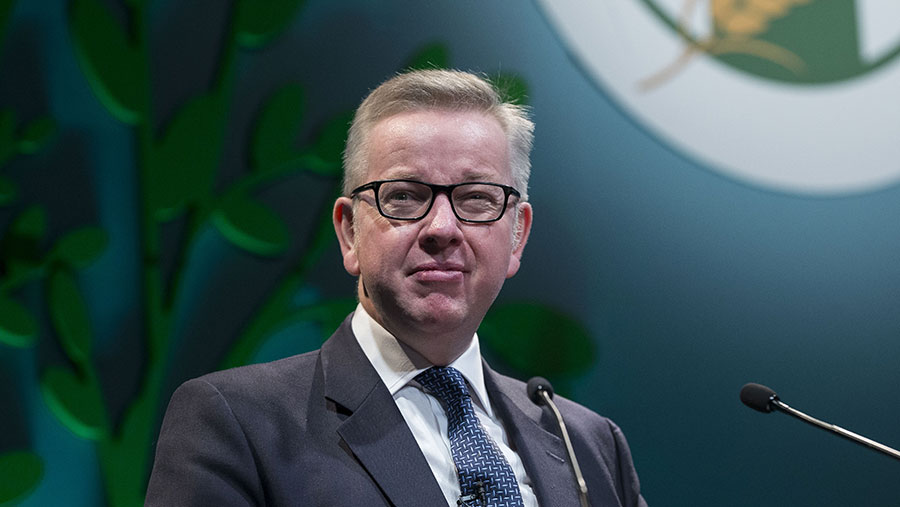 Farmers are being urged to prepare now for a revolution in agricultural support that will abolish direct payments and instead reward producers who undertake environmental measures.

It follows a much-anticipated speech by Defra secretary Michael Gove, who told last week’s Oxford Farming Conference that Basic Payment Scheme (BPS) payments would be phased out after the UK leaves the European Union next year.

The 2019 BPS scheme will be paid on the same basis as now. Mr Gove said he then envisaged that payments would continue in some form for a “a number of years” after which BPS would be replaced with a system of “public money for public goods”.

Asked how long the transition period might last, Mr Gove suggested it would end in 2024. This would give farmers enough time to adjust to the new system, he said. “I envisage that should be five years from the end of the existing BPS in 2019.”

This was a good starting point for a debate about balancing the need to give farmers enough flexibility to transition to the new system without perpetuating the idea that the existing system would continue and the new world would never dawn.

The government would continue to provide the same amount currently provided under the CAP in cash terms for UK farmers right until 2022, said Mr Gove. But the terms on which BPS payments are made will change – and some farmers will receive less than they do now.

“During these years, we propose to first reduce the largest BPS payments in England,” Mr Gove told delegates on Thursday (4 January). “We could do this through a straight cap at a maximum level or through a sliding scale of reductions, to the largest payments first.”

Change was necessary because payments based on land area were “unjust” and encouraged inefficiency, said Mr Gove. “It gives the most from the public purse to those who have the most private wealth,” he added.

Detailed proposals will be published by Defra in the coming weeks. They will be followed by a public consultation – which will itself be followed by an Agriculture Bill later this year.

New arrangements would include a scheme “accessible to almost any land owner or manager” who wanted to enhance the environment by planting woodland, providing new wildlife habitats, increasing biodiversity, contributing to improved water quality and creating wildflower meadows.

Farmers already in stewardship won’t lose out. “We will continue support for Countryside Stewardship agreements entered into before we leave the EU and we will ensure that no one in an existing scheme is unfairly disadvantaged when we transition to new arrangements.”

Industry leaders and analysts broadly welcomed the government’s plan to give farmers five years after Brexit to adjust to a new agricultural policy – but warned that success will depend on the finer detail and a good trade deal.

“With adequate time to prepare, we can ensure that the introduction of an ambitious new policy framework – one that is suited to the needs of the farming industry and the expectations of the UK public – is managed properly and delivered successfully.”
NFU president Meurig Raymond

“We will consider the forthcoming consultation on capping of payments closely. [Mr Gove] has been clear that businesses must be rewarded for what they do. That will not be the case if a poorly thought through and rushed capping policy excludes and alienates businesses simply because of their size.”
CLA policy director Christopher Price

“Pulling all these strands together, the future might run like this: Subsidies will largely be reduced and agriculture may be acceptable collateral damage in trade negotiations. As an industry, the message is clear that change is coming and we had better prepare.”
Clive Phillips, head of land and rural business, Brodies

“It is disappointing that Michael Gove continues to focus on the replacement of the BPS scheme rather than focusing on the principles of our new trading relationships with the EU and the rest of the world, as ultimately this will be what has a larger impact on the farming industry.”
Jonathan Stiff, head of rural division, Cheffins