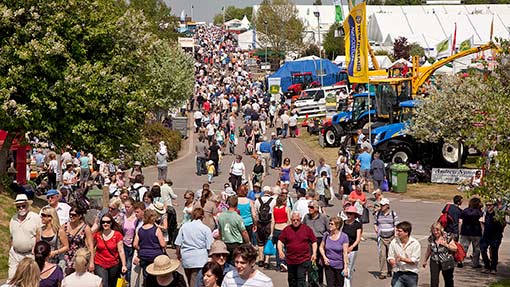 Heavy rain has forced the cancellation of the final day of the Devon County Show, leaving the organisers “heartbroken”.


Car parks at the rain-lashed Westpoint Showground, Exeter, were turned into a quagmire on Friday 23 May causing a spate of accidents. One of the accidents involved five cars and a pedestrian and was described by police as serious.


The bad weather, which hit the area overnight, is a far cry from the sunnier scenes enjoyed over the past few years (pictured).


Vehicles had to be towed on to the site by tractors on Friday morning. Torrential rain continued throughout the day and problems mounted as vehicles started to leave, leading the show society to cancel the final day on Saturday 24 May.


A society spokesperson said: “For the first time in our 119-year history we have been forced to cancel the third day of the show in the interests of public safety.


“It is heartbreaking to have to make this decision but the appalling weather has left us with no choice. We are not the first agricultural show to have to cancel a day’s activities and we won’t be the last.”


The spokesperson added: “Quite exceptionally heavy rainfall immediately before and during the show means it would not be safe to allow people to park their cars.


“The board of the show society will be meeting to consider all implications of this decision including the financial implications. Further announcements will be made in due course.”