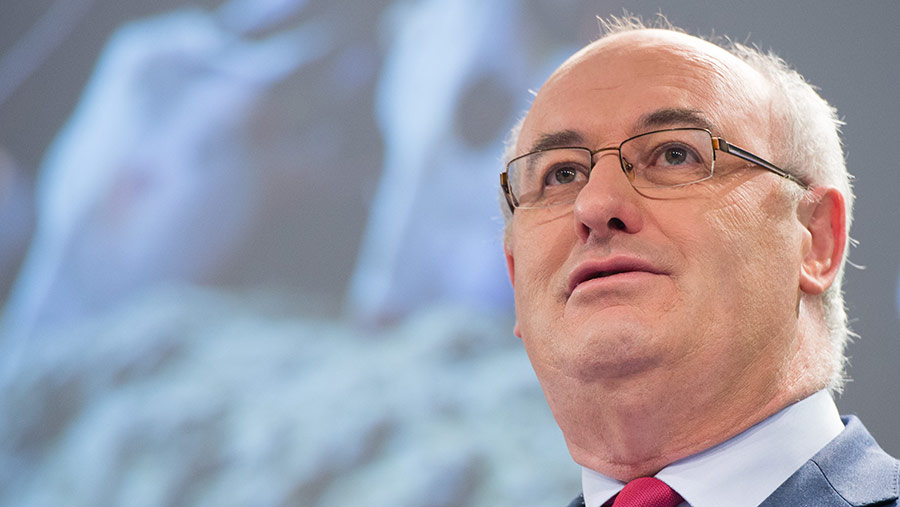 The head of the European Milk Board has called for the removal of EU farm commissioner Phil Hogan over his handling of the dairy crisis.

In a letter sent to Jean-Claude Juncker, president of the European Commission, Romuald Schauber calls for the removal of Mr Hogan from his office.

Mr Hogan had maintained that the dairy industry was not in crisis for several months this year, before he finally admitted in July there were “serious difficulties” facing the industry.

In his letter to Mr Juncker, EMB president Mr Schauber said the situation of European dairy farms “deteriorates every day”.

For months, farmgate milk prices have been only 25-30c/litre (17-21p/litre), whereas production costs were higher than 40c/litre (28p/litre), he added.

While some farms have already gone bankrupt, others were only continuing to produce milk propped up by loans of tens of thousands of euros, said Mr Schauber.

He blamed the crisis on the imbalance between supply and demand in the dairy market.

But Mr Schauber said Mr Hogan had failed to put forward any solutions to the crisis, adding that his actions had displayed a disregard towards helping dairy farmers.

“At the last Agriculture Council meeting, commissioner Hogan spoke again about a stabilisation of the milk market,” writes Mr Schauber.

“This was yet another statement in a series of comments that make us doubt that Phil Hogan really wants to find a solution and whether he is capable of doing so.

“In January, the Commissioner completely denied the existence of a crisis in the milk sector. At the end of September, in a TV interview with ViEUws, he declared that it is not true that prices do not cover production costs: ‘I don’t think that many farmers are producing at below the cost of production. They say that they are, but at the end of the day they continue to produce’.”

Despite these statements, Mr Hogan has had access to several scientific studies which prove that farmers do not receive a milk price that covers their costs of production, Mr Schauber added.

The EMB has asked the European Commission to respond to the letter by 4 December.

In September, Mr Hogan announced a €500m (£354m) farm aid package for farmers after thousand of farmers protested on the streets of Brussels.

Although farm leaders welcomed the package, some farmers described it as a “drop in the ocean” and many are using the money to pay off bills and farm loans.