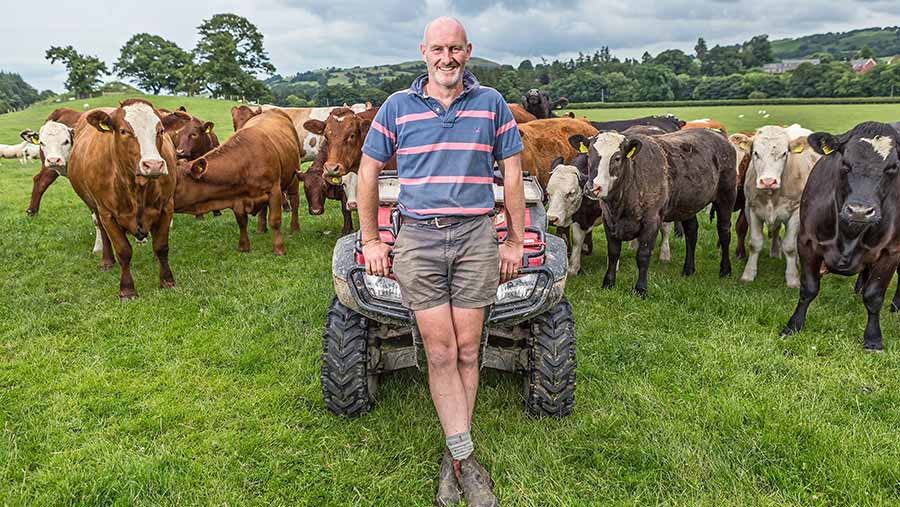 A highly respected and popular farmer died in a tragic accident after he lost control of his tractor while spreading fertiliser on a slope, an inquest heard.

Richard Tudor, 45, suffered fatal injuries in the accident while working at the family farm in Llanerfyl, Powys, on the evening of 3 April 2020.

The father-of-two was a well-known and experienced livestock farmer who was recognised for his brilliance in 2016 when he won the Farmers Weekly Beef Farmer of the Year award.

Mr Tudor was very active in his local community. He was a coach at his local Young Farmers’ Club and was chairman of the board of governors at his local primary school Ysgol Dyffryn Banw, in Llangadfan. He also wrote a monthly farming column for a community newspaper.

In 2018, he completed a Nuffield scholarship in soil health and fertility in grasslands, an essential component in improving upland beef and sheep productivity and sustainability. He was also a Hybu Cig Cymru board member.

An inquest held into Mr Tudor’s death at Welshpool Town Hall on 25 June heard he suffered crush injuries and serious neck damage when he was thrown from the tractor cab in the accident at the Welsh upland farm he co-owned with his parents.

His son, Morgan, found him at 7.15pm, after he failed to answer his phone, lying under a John Deere tractor at the bottom of a slope in Llechwedd Isaf field, Llysun Farm.

Police, paramedics, firefighters and an air ambulance were called, but Mr Tudor died from his injuries at the scene.

Morgan, now 18, said his father had spread fertiliser for many years in that field. He would use twin wheels if the ground was wet or soft, and without if it was dry, like it was on 3 April.

Gary Martin, a Health and Safety Executive officer, said there was no indication of any mechanical fault or poor maintenance of the tractor, and its tyres were in good condition.

He concluded that the tractor with spinner was travelling across the steepest part of the field when it may have moved outside its centre of gravity and a lack of a counterbalance could have caused it to topple over, rolling three times down the slope.

“The stability of the tractor would have been increased by the use of dual wheels and reducing the height of the Amazone spinner,” said Mr Martin. “It may well have been safer to go up and down the section of the field with an appropriate counter weight.

“Once control was lost, the rollover occurred and the consequences for the driver could have been reduced by wearing a seat belt.”

Assistant coroner Andrew Barkley said whether twin wheels fitted to the back of the tractor would have increased stability was conjecture. But the evidence suggested there was “no clear indication” they should have been used that day.

“It is impossible to say whether or not this tragedy may have been averted if they were fitted,” said Mr Barkley.

Recording a verdict of accidental death, he concluded that a “combination of factors” probably caused Mr Tudor’s death.

His widow, Catrin, said he was a “loving husband, father and family man”, who was “incredibly hardworking and dedicated” to the business.

“He would never have deliberately taken reckless risks and I can only assume it was a terrible accident,” she added.