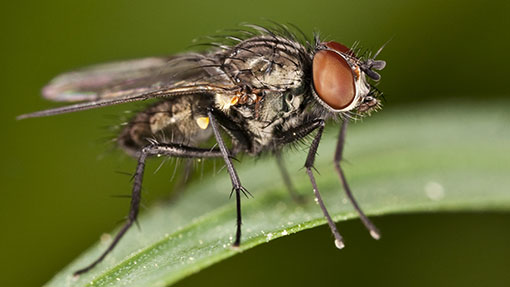 Insects could replace soya as a cheap and secure source of pig and poultry feed on farms across Europe, scientists claim.

Researchers think insects such as the common house fly could be the way to end Europe’s dependency on imported protein crops for animal feed.

As well as being cheaper than conventional protein sources, they say animals actually prefer insects to soya, and that insects help produce better-tasting meat.

Speaking at the British Society of Animal Science at the University of Nottingham on Tuesday 29 April, Dr Adrian Charlton of the Food and Environment Research Agency said insects could eventually be a viable alternative to conventional feed.

“We are only 30% self-sufficient in protein, and most alternatives are heavily land-based,” he said “On top of that global markets can be volatile, which impacts on food prices.

“A reliance on imported soya puts the UK and the rest of Europe in a situation where we don’t have a sustainable protein source, so looking to non-crop alternatives makes sense.”

Charlton said insects had the potential to help reduce animal and household waste while producing a highly digestible protein for livestock.

“Digestibility is 86-89%, which is much higher than any vegetable-based protein,” he told delegates.

“There is also potential to produce 150t of insects/ha, compared with an average 0.78t/ha with non-GM soya, at a much lower cost too.”

Studies had found that animals preferred to eat insects over conventional food, while an insect-based diet resulted in more palatable meat, particularly in chickens, he added.

“What’s more, there is also value in the waste insects produce,” he said, which could be used for compost, organic fertiliser or as a fuel source in anaerobic digestion.

Despite the potential, Charlton said it could be a number of years before UK farmers could be feeding insects to their livestock.

An EU-wide project was under way to investigate how farmers could make use of insects, but European rules needed to change before real progress could be made.

“It could also take a few years to get around the regulatory hurdles before we could start making viable business models,” he said.

“At the moment the EU market is restricted by legislation. Animal and household waste cannot be used as an animal feed, and insects are animals.

“But we are putting together a white paper to change the legislation and we are making progress.”

The process for producing insects were not yet optimised, and potential risks around food safety also needed to be scrutinised, he added.

“But we think we can introduce the systems to get around this, and it could open up potential new markets for insect producers to get involved.”

Leo den Hartog, director of research and development at feed company Nutreco, agreed using insects as feed was something which needed to be explored, but said would take a long time to develop.

“Using insects is much the same as with algae – it’s nutritionally valuable but it is still four times more expensive that soya,” he said. “We still need to take big steps in developing these alternative.

“I would encourage more experimental research into using insects, but I don’t think it will have a huge impact on farmers in the long-term.”