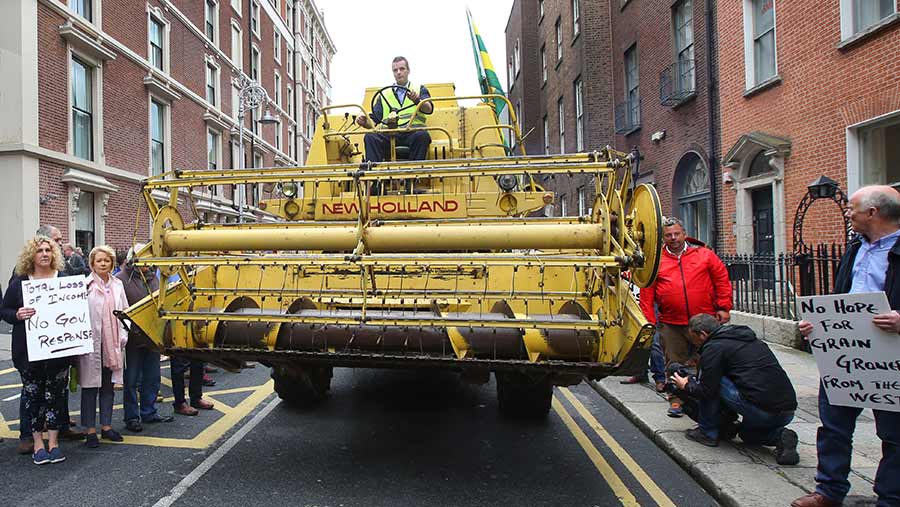 A combine harvester has been parked outside the Department of Agriculture in Dublin city centre to mark the sixth day of protest by Irish farmers over compensation payments.

Four members of the Irish Farmers Association’s (IFA) Grain Committee have been refusing to leave government offices since 5 July after a meeting on the terms of a inclement weather compensation scheme.

The four farmers – IFA Grain Committee chairman Liam Dunne, from Kildare, James Hill, from Wicklow, Peter Lynch, from Donegal, and Kieran McEvoy, from Laois – started their protest after it emerged that farmers will receive just €5,000 (£4,385) each.

Under EU state aid rules, the maximum the Department for Agriculture could pay farmers who lost crops in the 2016 harvest as a result of dire weather is €15,000 (£13,155).

Speaking from the combine harvester, Mr Dunne said the cap was completely unjustified.

“We came here on Wednesday and we asked for a meeting with the minister and he said he would think about meeting with us next week,” he said.

IFA president Joe Healy had welcomed the announcement last week by agriculture minister Michael Creed of a financial support scheme for farmers who lost crops in the 2016 harvest because of poor weather, although he said it was long overdue.

“While the IFA was unhappy with the €15,000 limit, we accepted that it was non-negotiable, as it was an EU rule.

“The very least we would accept is that the €15,000 state aid rule be back on the table. We can’t ignore this sector – it’s very, very, important to Irish agriculture. We can’t go away and we won’t go away.

Mr Healy said the four farmers occupying the building were not due to benefit from the scheme themselves and were solely acting in the interest of the relatively small – but hugely affected –number of farmers that would benefit.

A spokesperson for the department for agriculture said it was trying to facilitate a meeting with the IFA as soon as possible.

“Notwithstanding approval by the Department of Public Expenditure and Reform for the outline of a crop-loss compensation scheme, the final terms and conditions and application process for such a scheme are yet to be finalised.”