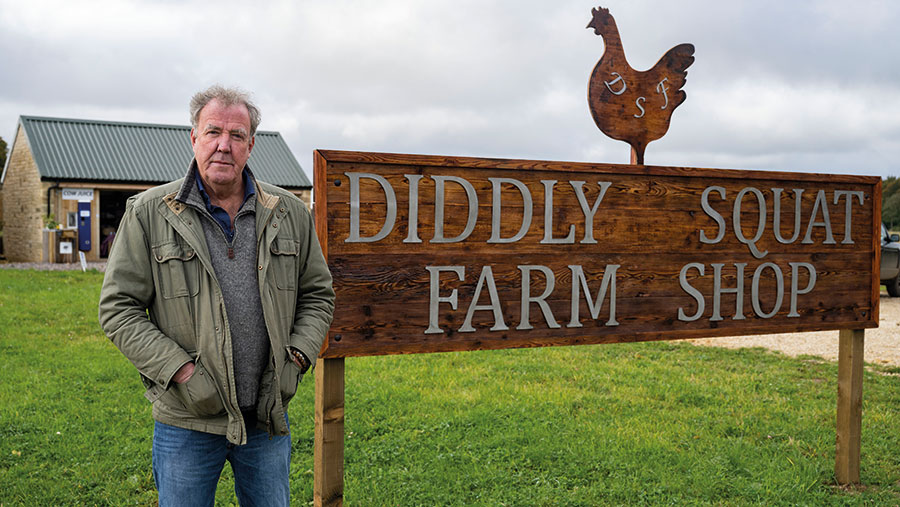 TV presenter Jeremy Clarkson’s latest hit series shows him trying to run his own farm – despite knowing nothing about farming. Farmers Weekly spoke to the man himself.

Where did the idea for the show come from?

Jeremy Clarkson: I bought the farm in 2008 and it was contract farmed by a chap in the village.

When he said he was retiring, I thought “Farming can’t be that difficult – humans have been doing it for 12,000 years. It’s seeds in the ground, weather happens, food grows and I go skiing. Fantastic. I will do it myself.”

Then I was talking to Gerald, who has done the combining on the farm for 50 years. He’s such a character I knew he’d be great on TV.

And then I started meeting everyone else around and I thought they’d all be good characters for a TV show.

Then I started watching TV shows about farming – and they all seemed to be Kate Humble with a bottle and a lamb and some fresh straw and a lovely barn.

Or it was BBC News with footage from inside a Texan cattle shed, which was obviously awful.

So I realised nobody had a clue what farming was really about. And I thought we could do wheat, barley, [oilseed] rape on a perfectly straightforward, ordinary 1,000-acre farm. And that’s where the idea came from.

It’s an entertaining show, but also grittily realistic. How did you strike that balance?

JC: I find it difficult to take anything seriously really. But I started to find myself taking this seriously and I didn’t want to do anything that farmers would watch and then say was unrealistic.

If this was the Grand Tour, the tractor would fall over and I would catch fire and everyone would laugh.

But I didn’t want to do that with this – I wanted to show people who aren’t farmers what farmers really do.

Who does the work, you or your farm manager Kaleb Cooper?

JC: I’m not practical – I can’t open sachets of sauce. I don’t look at something and instinctively know how it was put together and how it works.

Even after almost two years, I’m still not 100% certain how to put something on the back of the tractor.

I would love to be able to go out and hook up the drill, but I have to ring Kaleb and then he gets cross because he has to come over and do it for me.

I wanted farmers watching to see that Kaleb and Charlie knew what they were talking about – even if I didn’t.

And I would bring in a bigger, wider audience so people would be able to see that farming isn’t actually that bad.

Everyone seems to think farmers are either destroying the planet or filling food with poisons and you just think: “Where are they getting all this from?” So I’ve tried my hardest to do a series that says that’s just not true.

I’m whacking bird boxes up, putting beetle runs in the fields and putting turtle dove mix down, and I’m damning streams and I’m doing all those things – and I’m spraying everything with glyphosate. We are doing it realistically.

And like many farmers, you’re frustrated by red tape?

JC: I talk to farmers around here and it is very obvious that people whose families have farmed for generations know what they are talking about. They are not poisoning watercourses or deliberately killing birds or whatever.

Then you get these eight-year-olds in Whitehall who write the rules. And you think: “How can you know more?”

My natural instinct when someone presents me with a rule is to break it. I got that from school.

And I now think I am justified to break half of them because they don’t make any sense. The hoops you have to jump through are just extraordinary.

You started your own farm shop – how’s it going?

JC: Very well, actually. Now we’ve established there’s demand for the farm shop, in my head I’m trying to do all sorts of other things going into the future.

This year we’ve planted durum wheat – after the seed arrived late due to Brexit.

It will go to Matthew’s Cotswold Flour mill just down the road and then we can sell the flour in the shop. So there’s a circularity to everything.

Then it all starts to make sense to me financially – and in every way, really. We produce lambs and we sell the meat in the shop, we grow the wheat, we sell the flour in the shop, or whatever it might be.

I’m just trying to see if I can make this farm work, because last year, whenever there was a financial disaster, I’d have to go and host Who Wants To Be A Millionaire. But not every farmer can do that.

There’s a lot more to farming than you thought?

JC: I had an idea before – I mean I joke about you just put seeds in the ground. Obviously, it was more complicated than that.

I mean you’ve got to be a midwife, a vet, an agronomist, a fortune teller, a businessman, a gambler, an entrepreneur, a mechanic. You have to be so many things to be a farmer and I’m none of those.

I’m the world’s worst businessman, I’m totally impractical, and I have zero patience.

I mean of all the things you need to be a farmer, I have none of them. But I still want to do it.

And why do you want to do it?

JC: Because on a really nice evening when you’re bumbling along in your tractor and Radio 4’s on and there’s a beer in the cup holder and you’ve got a ploughman’s sandwich in your hand, it’s an incredibly enjoyable way of passing the time.

Let’s put it like that. I was going to say “it’s an enjoyable way of earning a living”, but that’s ridiculous. It’s a great way of life and I really enjoy it.

Farmers bringing agriculture to the masses

With its no-holds barred portrayal of farming, Jeremy Clarkson’s latest show will appeal to growers and livestock producers as well as the general public.

But farmers themselves are also proving to be a big hit – by filming their everyday activities and posting the footage on the internet.

The most popular farming channels on YouTube have thousands of viewers and subscribers.

Tom and his father Andrew are shown calving cows, silaging and everything in between. Tom also has his own successful line in merchandise.

Since starting the channel, some of his videos have been used by the Open University and Channel 4 television.

The soundtrack from one video was used on BBC Radio 4 for Stephen Fry’s Fry’s English Delight.

Andrew Rampton is a tractor/combine driver and relief sprayer operator. He keeps Limousin beef cattle and a flock of 80 sheep.

A third-generation farmworker, he spreads his time across three different holdings totalling 700ha.

The channel started as a joke at the beginning of the Covid pandemic, but Olly now has almost 15,000 subscribers.