How did John Deere come into being?

John Deere, the founder of the company, began his working life in 1825 as a blacksmith in Vermont in the north east United States. He moved to Illinois (where the company still has its HQ) in 1836 but discovered that the mouldboards on the cast-iron plough he had brought from Vermont became clogged by the heavy Illinois soils. 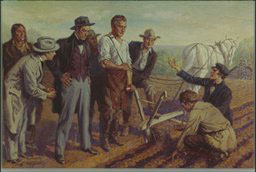 His innovation was to produce highly polished steel mouldboards with the right shape to self-clean properly – a terrific boon for farmers who had been used to continually stopping the horse-drawn plough to clean the mouldboards.

The first batch of steel came from Britain, involving a trip by steamship across the Atlantic, then up the Mississippi and Illinois rivers by packet boat followed by a 40-mile journey by wagon to the factory. But thereafter US steel was used.

The famous leaping deer logo began life in 1876 and has been changed seven times since. The year 2000 saw the most significant change. Instead of the deer being about to land on its two front legs, it shifted to being just about to spring off its back legs.

Some dates in John Deere’s company’s history
1870  Five product lines – ploughs, cultivators, harrows, drills and wagons – dominate the company’s output.
1890  Deere’s board recommends selling the company and British syndicate applies to buy it. But the deal falls through and the company remains independent.
1918  Deere buys the maker of Waterloo Boy tractors. 5634 were sold that year.
1923  Deere builds its first Deere-badged tractor
1927  The company builds its first combine
1949  First Deere diesel tractor enters production
1959  It builds the 215hp 10t Goliath, its largest tractor to date. Only a few are sold.
1979  Employee numbers hit 65,392, the highest ever.
2005  The company opens its latest assembly plant, this one in Russia

Like almost all the giant ag machinery corporations, Deere had a rough time back in the mid 1980s, but since then has enjoyed steady expansion.

2007 sales are expected to be good, thanks to a rising (and increasingly affluent) world population and a boom in the use of crops for pricing biofuels.

There’s a mass of information out there on the early career of John Deere himself. The best place to look is on John Deere’s US website, but Wikipedia also has a useful section. There’s also information on  John Deere’s older tractor models on a separate site.

Back to the John Deere guide