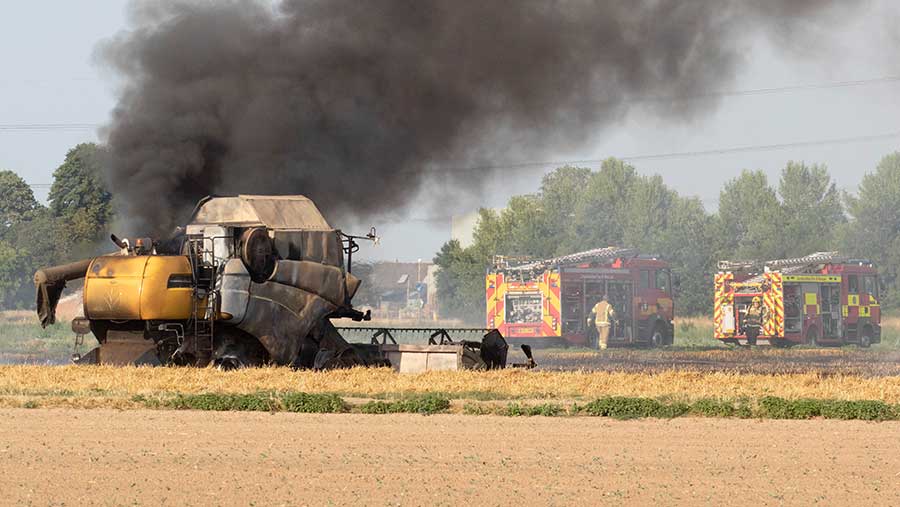 A quick-thinking Kent farmer helped control a massive fire and prevent damage to property and risk to life over the weekend.

Bill Alexander jumped into action when he saw the fire raging in neighbour Andy Barr’s spring barley crop  between Maidstone and Ashford on Saturday 23 July.

Fearing the blaze could spread to nearby houses, Mr Alexander quickly cultivated a fire break across the barley as close to the flames as he could.

See also: Business Clinic: How can I reduce risk of harvest farm fire?

Mr Barr dubbed his neighbour’s actions “heroic”, and video footage of the incident made the national news over the weekend.

According to Mr Barr, about 20ha of spring barley was affected – and he called on members of the public to avoid doing anything on roads and footpaths during the heatwave that could spark fires in nearby fields.

Kent Fire and Rescue Service sent eight engines, all-terrain vehicles and a bulk water carrier to the scene and warned road users on the nearby M20 to take extra care, given the potential for smoke drift.

By 4.50pm on Saturday, the fire service confirmed that the fire had been put out and no one had been injured.

Meanwhile, rural insurer NFU Mutual said the combination of prolonged dry weather and low moisture content in crops in many areas was bringing an even bigger risk of fire than usual.

The organisation is urging farmers to put new prevention and control plans in place, including thorough vehicle maintenance and cleaning, plus fire suppression systems in combines.

“With supply chains disrupted in the wake of Covid-19, Brexit and conflict in Ukraine, NFU Mutual is also concerned that sourcing spares for fire-damaged combines or bringing in replacement machines could be difficult during the 2022 harvest.”