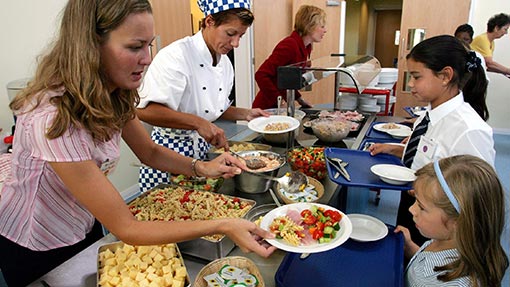 Parents want to see more British food served up in schools and more lessons on food and farming, according to a new NFU survey.

A YouGov poll commissioned by the NFU of more than 1,100 parents found that 76% agreed that food should be sourced from Britain wherever possible.

Meanwhile, 87% of parents responding to the survey thought that at least half of the ingredients in British school meals should be procured from British farms.

And 78% of parents would take up the offer of free school meals that are now available to all pupils aged between five and seven at schools across England.

The survey, released to coincide with National School Meals Week (November 3-7), also revealed an overwhelming majority of parents (88%) thought it was very important that their children were taught about how food is produced on farm, and where it comes from, as part of the school curriculum.

NFU deputy president Minette Batters said: “As a mum myself the results of this survey come as no surprise.

“It’s great that many parents are as passionate as me about the origin of school meals and their children being able to access a nutritious meal at lunchtime.”

Ms Batters said now was a great time for school caterers and all those involved in the supply chain to back British farming and procure more local and seasonal food.

She added that the NFU would encourage head teachers to engage with their catering provider and supply chain to procure more British food, recognised easily by the Red Tractor logo.

The union is also urging teachers to connect with organisations such as Farming and Countryside Education (FACE) to organise on-farm educational visits where pupils will be able to understand the work that goes into producing top quality British food.

“We will continue to play our part in ensuring schools source more British food and helping to focus ideas to provide a strong platform to build a bright future for our children – not just for lunch but through cooking and food education,” said Ms Batters.

The poll also showed a growing importance among parents that children learn about how and where their food is produced.

The survey of 1,114 English parents of primary and secondary schoolchildren was carried out online.