Clinical signs of cobalt deficiency (pine) are most commonly observed in grazing lambs after weaning (Figs 1 and 2).  Signs are non-specific and include lethargy, poor appetite, poor quality wool with an open fleece, small size and very poor body condition despite apparent adequate nutrition, and tear-staining of the cheeks.
It is reported that cobalt-deficient sheep suffer from a non-specific immunosuppression and are more susceptible to infectious diseases including the clostridial diseases and pasteurellosis.
Diagnosis is based upon clinical signs in areas with known cobalt-deficient soils supported by low plasma and/or liver vitamin B12 concentrations collected by a veterinary surgeon.  As a general guide, a growth response is expected within one to two weeks of oral supplementation.

Oral cobalt supplementation is very cheap indeed, and with many anthelmintics belonging to Group 1-BZ and Group 2-LM the cobalt supplement is already added to the drench.  Monthly dosing from around three months-old with proprietary cobalt-supplemented anthelmintic drench should supply sufficient cobalt to growing lambs in most situations.

Cobalt oxide containing boluses, which lodge in the reticulum, provide a continuous supply of cobalt but are expensive in those lambs which require a short supplementation period of only two to three months.

Soluble glass boluses containing cobalt, selenium and copper are available in some countries but are a very expensive means indeed of supplying cobalt and are only indicated in situations where all three deficiency conditions (cobalt, copper, and vitamin E and selenium) are considered to exert a negative influence on health.

As well as being susceptible to copper deficiency, sheep are also prone to copper accumulation and toxicity.  There is considerable breed variation with respect to copper absorption and therefore to copper deficiency and toxicity.  While copper deficiency is often a perennial problem on certain farms, farmers must always be aware of the risks of copper toxicity and seek veterinary advice. Copper is usually given by injection as copper heptonate. Supplementation can also be effected with copper oxide needles administered orally in a gelatin capsule at a dose rate of 0.1 g copper oxide per kg liveweight.

White muscle disease occurs in the UK with recognised risk factors such as feeding home grown cereals and root crops, and incorrectly mineralised rations. However, the disease prevalence is generally low. In the UK, white muscle disease typically affects rapidly-growing two to six week-old lambs, often ram lambs of meat breeds such as the Suffolk and Texel.  There is sudden onset stiffness with lambs reluctant to move such that they are easily caught. After one or two days, affected lambs are unable to rise and remain lying down. 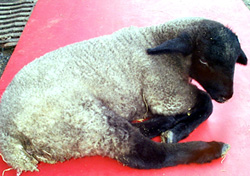 Intramuscular or subcutaneous injection of young lambs suffering from white muscle disease as directed by a veterinary surgeon, results in return to full mobility within two to three days.

Selenium supply via regular anthelmintic drench (often monthly) is a cheap and reliable means of supplementation for growing lambs but not all anthelmintic preparations are suitable for combined drenching.  This latter point is important for those farmers who follow an annual rotation between the three anthelmintic groups.

An online, automatically marked quiz on this subject can be found at www.nadis.org.uk
Copyright © NADIS 2007