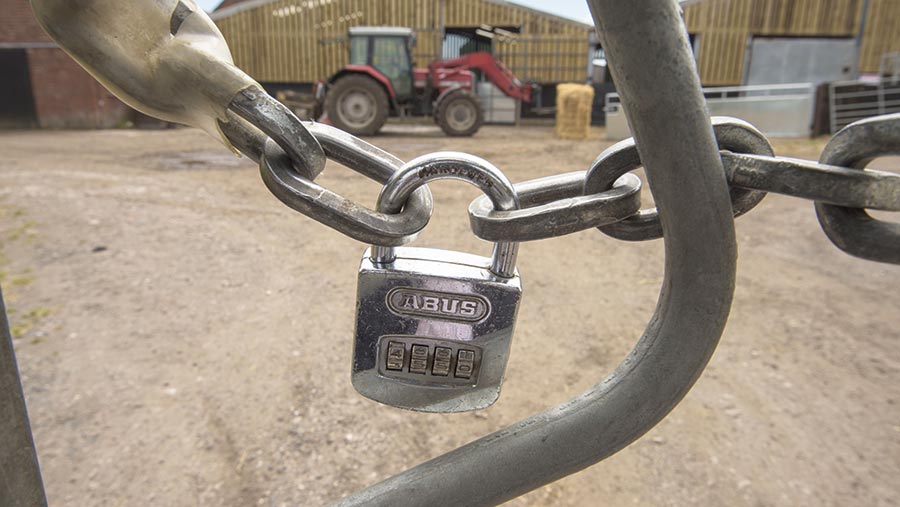 The impact of offences such as farm theft, fly-tipping and hare coursing will be highlighted by NFU leaders in central London next week when they launch the union’s Rural Crime Manifesto at the House of Commons on Monday (17 July).

The manifesto will call for a more co-ordinated approach to tackling rural crime. Action must be taken by government, chief constables, police and crime commissioners – as well as farmers themselves, argues the NFU.

Crime is the “number one issue” among farmers, says NFU deputy president Minette Batters. She adds: “We need a more joined-up, action-based approach from government to tackle this problem – I have never known rural crime as bad as it is now.”

Government departments other than Defra must also address the challenge of rural crime, argues Ms Batters. “Straightforward on-farm crime has massively escalated and action is not always taken, even when it is reported,” she says. “It needs to be prioritised.”

Estimates vary when it comes to the cost of rural crime – probably because much of it is unreported. NFU Mutual puts the cost at £42.5m in 2016. But the National Rural Crime Network, which champions a better understanding of crime, suggests it could be as high as £800m.

Either way, there is little doubt that significant damage is frequently inflicted on farm businesses.

Farmers also often experience violence and intimidation when they disturb criminals on their property. At the same time, police response times in rural areas often lag behind those in cities.

The impact of farm crime and perceptions of rural policing were recently investigated by farmer’s daughter and Harper Adams student Molly Dickson.

She focused on her home county of Hertfordshire – the first to pioneer the rural special constable initiative back in 2009.

Survey results confirmed that farmers had been victims of a variety of crimes – with fly-tipping and hare coursing a particular concern. But they also found that only 16% of farmers reported all the crimes they suffered to the police.

Many farmers felt the deterrents and levels of fines for fly-tipping and hare coursing were not severe enough and that the judiciary does not understand the implications and costs of these crimes to farmers – and therefore was not using its sentencing powers to the full.

“The survey found that Hertfordshire farmers’ perceptions of policing are varied, with many appreciating the work the force does,” says Ms Dickson. “However, the results indicated there is still room for improvement.

“Rural crime not being a priority and a lack of manpower and resources were common issues raised and several farmers believe that although police understanding of farmers’ concerns is improving, they still do not understand fully.”

Police step up step up fight against criminals

A new fleet of 4×4 vehicles and a drone with night vision capabilities are among the latest weapons to be employed by police against rural crime in Lincolnshire.

A rural community safety strategy announced last month by chief constable Bill Skelly promises to deliver a better service to farmers. It aims to tackle issues such as farm theft, hare coursing and mindless damage to heritage sites and churches.

A rural advisory group aims to improve communication between farmers and police. Mr Skelly says: “We are also improving the technology in our Automatic Number Plate Recognition Network so offenders can be more easily traced.”

Lincolnshire remains one of the country’s safest counties, says Mr Skelly. But he adds: “Crimes in our countryside are not invisible, will not go unnoticed or undetected and our strategy may change to combat emerging trends.”

NFU regional director Gordon Corner hopes the new vehicles and drone means police officers will be better equipped to catch the criminals who prey on farming and other rural businesses. “Rural crime is a huge issue for our farming community,” he says.

Mr Corner adds: “The fears voiced by farmers and their families are compounded because of the isolated nature of their homes and businesses; ensuring a timely police response to reports of crime in our rural communities is essential.”

Improvements needed in response to incidents

Farmers should report rural crime whenever it happens – even if it seems a waste of time, believes farmer’s daughter Molly Dickson, who studied the issue at Harper Adams University.

Police resources are intelligence-based: police need to know where the problems lie so those resources are deployed where they are needed, argues Ms Dickson. But improvements would encourage more farmers to report crimes, she adds.

“The method of reporting needs to be made quicker and easier. Often farmers give up after dialling 101 and waiting on hold for a long time. I also think that more regular police feedback of arrests and convictions would let farmers know that their reporting is not wasted.”

A better understanding of rural crime among control room staff would encourage farmers to report incidents, says Ms Dickson. “If every officer who attends the scene of a rural crime had a sufficient understanding of the issues and implications, the perception of policing would improve.”

Farmers also feel that rural specials – volunteers with the same powers as regular police officers – have a better understanding of rural crime and its implications, says Ms Dickson. This can lead to more effective communication and response between farmers and police.

“Rural specials also have greater knowledge of the local area and community which is beneficial when preventing and solving crime. To an extent, they have played a part in educating regular officers on rural matters.”