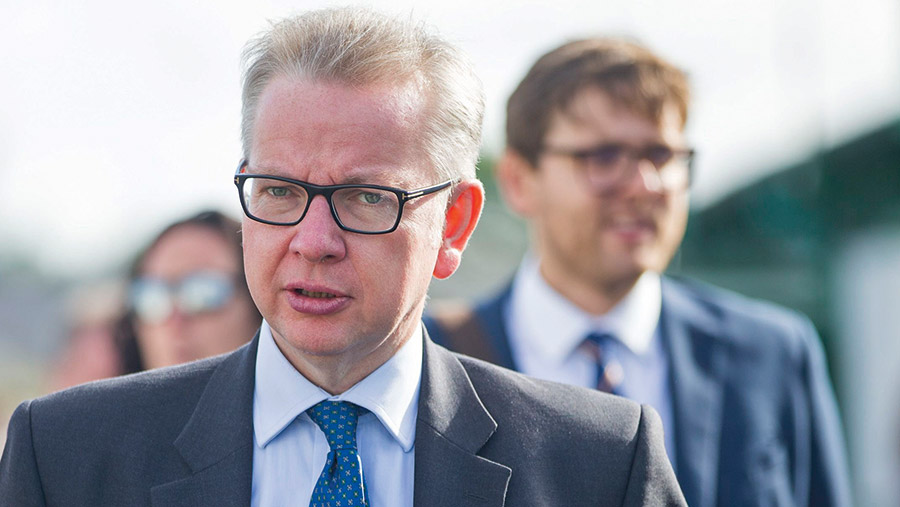 Farmers Weekly looks back at the biggest stories to hit the headlines from April to June including the surprise appointment of Michael Gove as new Defra secretary and our fly-tipping campaign Stop the Blot.

Defra secretary Michael Gove pledged to put farmers at the heart of post-Brexit policy-making after a general election which saw him return to the heart of government.

Prime minister Theresa May – who had previously and repeatedly ruled out going to the polls – surprised political commentators by calling a snap election for 8 June.

The result didn’t go her way – forcing her to form a minority government.

Despite still being prime minister, Mrs May’s government is reliant on support from Northern Ireland’s Democratic Unionist Party and the Scottish Conservatives. Both parties have MPs with strong farming connections among their numbers.

The election also paved the way for Mr Gove’s reappointment to the Cabinet – becoming the sixth Defra secretary in just seven years.

Perhaps mindful of the government’s precarious position, he pledged an “open and frank dialogue” with farmers as it develops post-Brexit agricultural policy.

Without a majority, the government is less able to do what it wants when it comes to policy formation.

After the election, farm leaders called for a more consensual approach to Brexit if the government is to secure a satisfactory deal for agriculture.

The NFU wants continued tariff-free and frictionless access to the EU single market. But it is hard to see how this can be achieved when the government remains determined the UK will leave both the European single market and the customs union.

Tariff-free and frictionless access to the single market has previously only been afforded to those countries who are members of the EU, European Free Trade Association or the customs union – and those countries are expected to accept free movement of labour, which Mrs May has also ruled out.

It is also clear that – like Mrs May – growers and livestock producers won’t get everything their own way. Mr Gove has already pledged support for a wider ban on neonicotinoid seed treatments, for example, to cover all crops.

In the post-Brexit era, farmers will also have to do more in return for support.

Despite pledging to make Brexit work for farmers, that is likely to include undertaking more environmental work in return for payments and the eventual abolition of direct subsidies, especially for the UK’s largest farmers.

Fly-tipping is out of control in our countryside, which is why Farmers Weekly launched a major campaign to tackle the illegal dumping of rubbish on farms.

The scale of rubbish being dumped in the countryside by unscrupulous operators in farmyards, gateways and rural fields has increased.

Ruthless gangs of organised criminals operating mainly around the urban fringes are targeting farms with easy access from motorways – and dumping lorry-loads of waste to avoid costs.

In March, we revealed how Shropshire grower Andrew Nicholls, 70, faced an £18,000 clean-up bill after 100t of industrial waste was dumped on his land.

In April, Essex grower Harry Fisher told how criminal gangs regularly smash farm gates and dump lorry-loads of recycled rubbish on his 240ha arable farm in Rainham, which is “like a war zone”.

An FW survey of nearly 1,200 people, carried out in July in association with CLA Insurance as part of our Stop The Blot campaign, laid bare the crisis affecting our countryside.

Our campaign has uncovered serious failings in policy and unacceptably low penalties for offenders – despite tougher sentencing guidelines introduced in 2014.

Councils pay the costs for clearing waste from highways. But farmers are responsible for removing waste dumped on private land – and can be prosecuted if they fail to do so.

CLA president Tim Breitmeyer said: “We will continue to highlight the issue of fly-tipping on private land until a reasonable and fair solution can be introduced to ensure clearing up other people’s rubbish is not the responsibility of the landowner.”

A round-up of other news from April to June