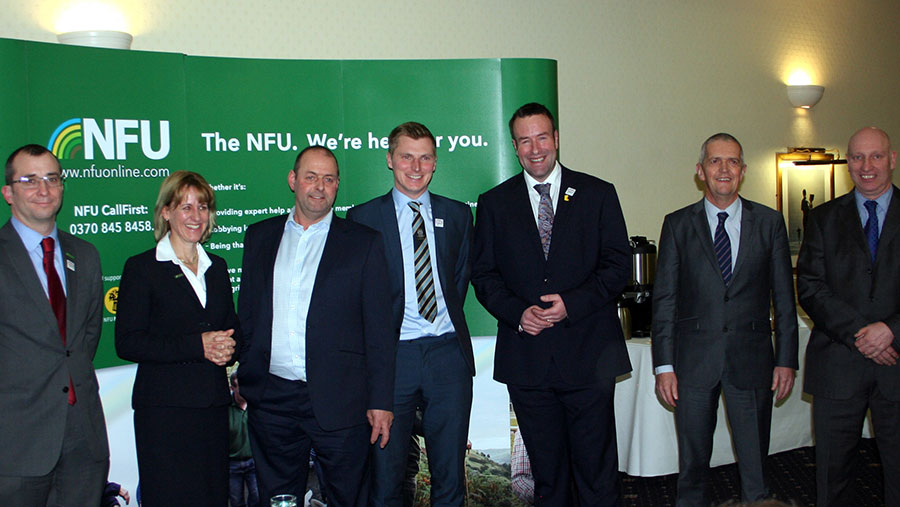 Candidates called for greater transparency in the UK supply chain and promised to engage the next generation of farmers at the NFU’s South West hustings.

Seven candidates are battling to take on one of three NFU officeholder positions: president, deputy president or vice-president.

The second of eight election hustings took place in Tiverton, Devon, at 7.30pm on Monday (22 January) and gave members the opportunity to put their questions to the candidates.

Current NFU deputy president Minette Batters, who is running for NFU president, called for more fairness for farmers in the UK’s food and farming supply chain.

She said: “There are many things that we take for granted that we really need to be shouting about. Our supply chains are the safest in the world.

“In good times it’s okay, but we know in bad times it is a nightmare and we put people out of business. That goes the same across all sectors. Our costs have got to be covered from somewhere, especially if we’re going to deliver a green Brexit.”

Other candidates, like Hertfordshire arable and livestock farmer Stuart Roberts, called for more transparency in the supply chain.

He said: “One of the key things for me is integrity and how we deal with supply chains. The supply chain I understand better than any is the meat one, but I think there’s some very similar parallels. I have seen first-hand what happens when supply chains go wrong.

Staffordshire young farmer Richard Bower, who is a candidate for vice-president, agreed farmers want more transparency in the supply chain, stating policies should not just focus on subsidies and payment plans.

He said the industry’s biggest opportunity lies in creating a domestic agricultural policy which is more sector specific.

When questioned on how he would take on the challenge of engaging the next generation, he explained: “We need to mix the experience of the older generation with the innovation of the younger farmers. If I get voted in, others will be hot on my heels.”

Current NFU vice-president Guy Smith, the second candidate standing for president, said reaching out to the under 40s in the industry would help build for the future.

He added: “In the next couple of years politicians are going to make decisions that could well colour the fortunes of our industry for a generation. In many ways the younger generation has more skin in this game than my generation.

“We must reach out to the under 40s with this offer of ‘get involved, this is your future being decided’ and I hope they will meet us halfway. We must build for the future.”