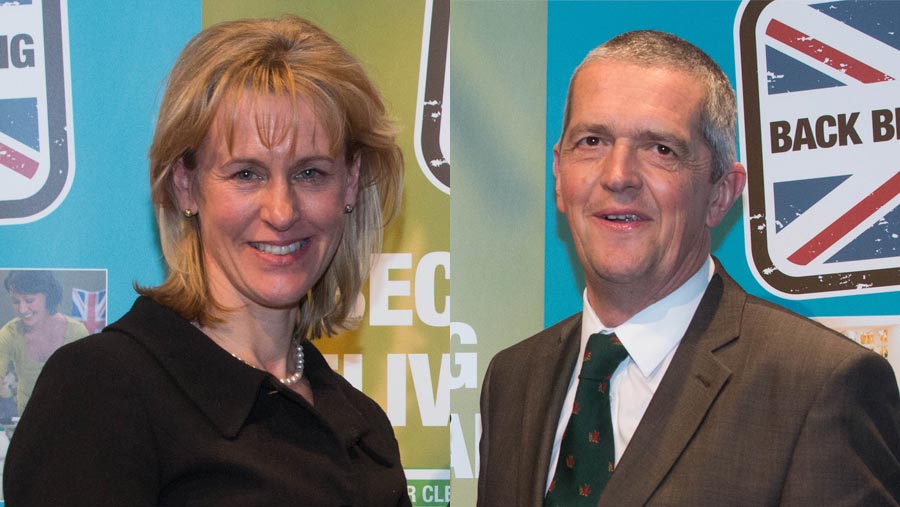 NFU leadership hopefuls have set out their stalls – calling for better teamwork as the union prepares to elect its next president.

Seven candidates are fighting it out for all three NFU officeholder roles of NFU president, deputy president and vice-president.

Due to take place next month, the biennial elections coincide with a decision by Meurig Raymond to stand down following four years as union president.

The first of eight election hustings – giving farmers the chance to quiz the contenders – took place at Cobham, Surrey, on Monday (22 January).

The need for a team of officeholders that works better together was repeatedly raised by candidates and NFU members during the hustings.

Other candidates are contesting the roles of NFU deputy and vice president – some standing for both posts, others only for vice-president (see ‘NFU elections 2018 – candidates and hustings’, below).

Ms Batters said the union needed to be more fleet of foot as the government prepared to devise new policies for agriculture as the UK leaves the EU.

It is vital the new officeholder team is able to hit the ground running by the end of February, Ms Batters told listeners.

“Teamwork is everything – not just within the officeholder team but the NFU as a team.

“I think we would all agree the NFU works best when it has bought into key messages that everybody in the organisation stands behind.”

Mr Smith said he had enjoyed working with Mr Raymond but felt all three NFU officeholders would work better together as a team if they spent more time together.

Mr Smith said: “I wanted to make sure that every Monday morning all three officeholders were in HQ talking about the week.

“That didn’t happen and probably for very good reasons.”

“If I was president or deputy president I think we just need to physically spend more time with each other so we understand what we are all doing.

“There wasn’t enough of that going on.”

West Midlands dairy farmer Michael Oakes, who is standing for the roles of NFU deputy and NFU vice-president, said he too felt there needed to be more teamwork.

Mr Oakes said: “We have had three strong candidates over the past three years as officeholders – but I think they have missed a trick and haven’t really worked as a team.

Teamwork was vital at regional and national level for the NFU to be successful, he added.

“Too often we have been reactive rather than proactive,” said Mr Oakes.

Leicestershire sheep producer Charles Sercombe, who is also running for deputy and vice-president, said it is vital that officeholders work as a team.

The role of the deputy or vice president is to support the president, said Mr Sercombe.

“If I had one criticism – I am going to say this and I am going to get into trouble – over the last year or so, we haven’t been enough of a team.

“We have to work more closely together.”

The NFU leadership election will take place immediately after the union’s annual conference in Birmingham on Wednesday 21 February.

They will be followed by hustings at Skelmersdale, Lancashire and Scotch Corner, Darlington (Wednesday 24 January); Oakham, Rutland and Newmarket, Suffolk (Thursday 25 January).