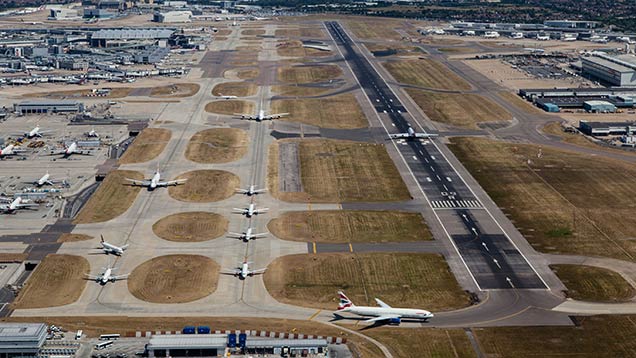 The NFU is seeking views on the knock-on effects to farm businesses of airport runway expansion plans either at Heathrow or Gatwick.

The Airports Commission published a consultation on 11 November to assess proposals for a new runway at Gatwick and Heathrow airports.

The consultation invites public comment on the costs, effects on communities of noise, property loss and construction, the economic benefits and environmental impacts. The consultation closes on 3 February 2015.

The commission is considering three options for increasing flight capacity: a second runway at Gatwick, a third runway at Heathrow or an extension of one of the existing runways at the airport.

Depending on the final site chosen, there is a strong possibility that farm businesses and good agricultural land will be lost.

A spokesman for Berkshire farmers J Rayner and Sons, based in Horton, near Slough, said they were “very concerned” about possible expansion of Heathrow.

He added: “The northern runway extension would go straight through our farm and finish us off.

“Even if they don’t take any of our land to build the runway, the infrastructure around here cannot cope.

“The family has farmed here since the 16th century. We are in the same boat as farmers affected by HS2. Our lives are on hold.

“We cannot do anything on the farm to invest, such as making units or renting farm properties, because of the threat of Heathrow expansion.”

NFU member and retired farmer Roy Barwick, 93, whose son Roger farms in Harmondsworth, near Heathrow Airport, said: “The whole situation at the moment is totally fluid. Nobody knows what’s going to be happening until the commission reports back.

“We are the last functioning farm in this area. When we go, it will be the end of the line. Nothing may happen at all.”

The NFU said its members had a wide range of views both in favour and against the various options.

An NFU spokesman said: “The development of air transport infrastructure may represent substantial opportunities and risks for the export and import of food commodities as both options would expand freight handling capabilities.

“Alongside this we are also interested in making sure that both options avoid severe adverse impacts on our members’ farm business operations, and where these are unavoidable, appropriate levels of mitigation and compensation are included as part of the proposed scheme.”

To give your views to the NFU or seek further information, please contact tom.ormesher@nfu.org.uk