Supply problems at a major provider of liquid nitrogen have frustrated growers eager to get on with fertiliser applications. Some customers of manufacturer Yara have been told that no more deliveries could be made until mid-May.

The firm’s Mark Tucker said the main reason for the shortage was the late arrival of vessels supplying raw materials. Although he did not know why they had been delayed, the next shipment was not due until the second week of May.

The shortage had been compounded by a 1-2% swing towards liquid nitrogen this season and demand from cereals, oilseed and potato growers coinciding during the abnormally long, dry period, he said.

“Supplies haven’t dried up completely, so we’re supplying what we can. We’re trying to prioritise people according to what crops they’re growing, but in some cases it may be necessary to go elsewhere.”

On Monday (23 April), Mr Tucker reckoned the impact on crops had been minimal so far because the weather had remained so dry. “In many cases, moisture is the limiting factor and much of the nitrogen that’s in the soil isn’t available to the crop.”

Omex managing director David Featherstone reported no supply problems, although he acknowledged there had been a slight increase in demand for liquid nitrogen this season.

“No rain for the past five weeks has actually made this spring a bit easier to manage.” 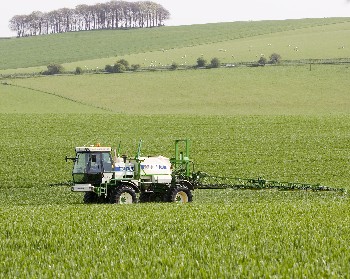 Increased demand for liquid nitrogen, combined with an extended spraying
window, has seen demand outstrip supply for customers of Yara

Hampshire farmer and FW columnist Charlie Flindt added: “Luckily we managed to get one lorry-load delivered before the [Yara] supplies stopped, but had to order another from someone else.”

He had treated his 53ha (130 acres) of spring malting barley before mid-April, but was concerned about the impact delayed applications would have on other crops.

“If nitrogen goes on too late, barley crops could fail to make malting quality, and there’s also a danger not enough will have been applied to get decent yields. Some wheat treated several weeks ago, also needs a follow-up now.”

Increased demand for liquid nitrogen, combined with an extended spraying window, has seen demand outstrip supply for customers of Yara.