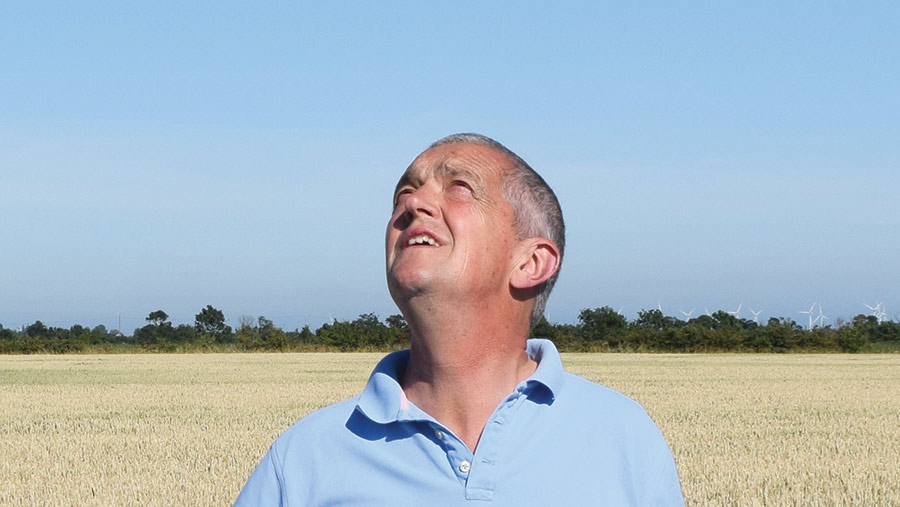 Guy Smith prays for rain during the long, hot summer of 2018

As 2018 draws to a close, it feels it’s been a rather over-earnest year. But with my Twitter account acting as a diary come aide-memoir, here are 12 of the quirkier moments that brought a smile to my face.

Mrs Smith announces she is thinking of doing a “Veganuary” ( at least I think that’s what she said). She wonders if I’d like to join in. I decline on the grounds I’m not quite sure what I’m actually being asked to give up.

Begin a train journey at Colchester station, buying a ticket to Birmingham where the NFU is holding its annual conference and AGM, and where I’m hoping to be re-elected as an NFU officeholder.

Bloke behind counter: “Do you want a return?”

See also: Guy Smith’s reflections on the 100th anniversary of the Armistice

Battling with the “Beast from the East”, I dig out a nearby, snowbound community of 12 residences, where an elderly lady appears on her porch and shouts “Thank God you’ve come, my husband Keith has run out of his heart tablets”. I wore my superman pyjamas with extra pride that night.

Find myself puddling in the last of the spring barley after I’ve heard the first cuckoo. Dad always said to never bother with “Cuckoo barley”. By harvest time, he was proved right – as usual.

Submit my Basic Payment Scheme form. RPA maps suggest there’s a 20m gap in my hedge, but I struggle to find it. I launch “hedgegate”.

As the drought begins to bite I tweet: “If I don’t get at least an inch in June I’m going to be disappointed.” Some uncouth wag tweets back: “Who is June?”

After 59 days without rain, we finally get the small mercy of a shower. I start casually slipping mysterious words like “petrichor” into conversation. Petrichor – a pleasant smell that frequently accompanies the first rain after a long period of warm, dry weather (Oxford English Dictionary).

Finish harvest at our earliest date since 1976. Overall the harvest proves surprisingly good, but the last field of spring wheat is so poor that harvesting feels more like “getting rid of the evidence I ever tried to grow it”.

Pulling into Kings Cross, the train announcer turns comedian saying: “For those using the underground, remember it’s a good place to teach your pet to play the trumpet. My dog went from Barking to Tooting in 20 minutes.”

Start drilling wheat in the knowledge it will be harvested and sold in what could be a very different post-Brexit market. Still looks like the same old wheat though.

A cancelled train leaves me stranded at Hertford Station with my car in Harlow. Very kind lady I’ve never met before offers me and fellow stranded passenger a lift to Harlow. During the car journey, her daughter phones. She replies on her hands-free: “Can’t talk now darling, I’ve got two strange men in the car with me.”

Having clocked up a fair few thousand miles with the NFU job over the year, it’s feels great to be home and on-farm for Christmas. I’m hoping not to hear the word ‘Brexit’ all week. Here’s hoping Mrs May gets similar respite.