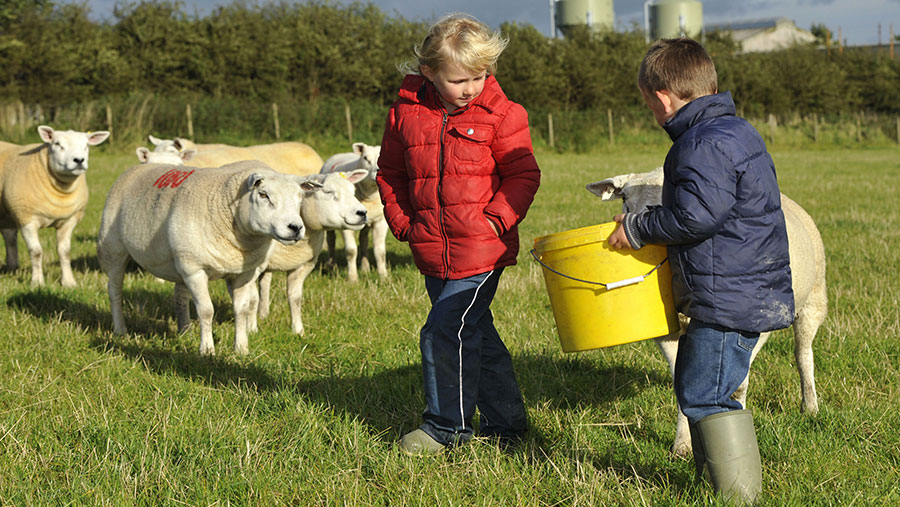 I don’t know how it comes around so quickly, but the school holidays are nearly here once again, and I face the prospect of having four small and extremely boisterous daughters running around daily, enjoying the many benefits of growing up on a farm.

A visit to the Evans household can be an assault on the senses, and the noise and general chaos often sees even the stoutest of hearts exit via the fastest getaway route possible. And I wouldn’t have it any other way.

When I look back on my own childhood, and those endless sunny days of  summer, I can’t help but smile. My sister and I spent our time making dens in the little straw bales, climbing trees in the woods and damming up the brook.

On the odd occasion that my mother would need us to return to the house, she’d blow a long blast on my grandad’s old Home Guard whistle. It really was like living in a Famous Five novel. Or perhaps that should be Just William.

I knew then, from a very early age, that I wanted children, and I wanted them to have a similar childhood to mine.

But it’s a fact that farm life has changed dramatically since the 1980s. The tractors and machines that we use now are much bigger, faster and more powerful, and have far less driver visibility. There are fewer people about on farms in general, and time pressure seems to increase year on year.

So is it still safe in 2018 for children to roam about freely as they once did? It’s the dilemma that we face as parents, where our farms are our homes as well as workplaces.

I adore having my girls out with me; it seems to make all the hard work and hours we put in make sense. I hope that it instills a teamwork ethic in them that will stand them in good stead for whatever they choose to do in the future, whether that be in farming or not. But I also worry constantly.

When you stop and take a step back, there are hundreds of dangers that, in the everyday rush of getting the job done, we often don’t even notice.

I recently spoke to farm safety campaigner James Chapman, who lost his arm in a PTO shaft in 2005. James is both articulate and sensible on the subject, recognising that although we can all make improvements to safety standards, it would be a crying shame if our children couldn’t be there with us.

He suggested getting them to try to spot potential dangers on farms, not only as a fresh pair of eyes and a different perspective, but to get them involved in the whole process from an early age. I think that’s a fabulous idea, and will definitely be doing that here.

I’ve also ordered high-visibility vests for them to wear outside when they’re with me. I hope that the very act of putting them on over their overalls will heighten their awareness of potential danger. They cost just a few quid and could potentially save us all from a lifetime of heartbreak.

The number of serious accidents involving children on UK farms is an uncomfortable truth, and an extremely difficult thing to talk about, but it’s a conversation that needs to be had.