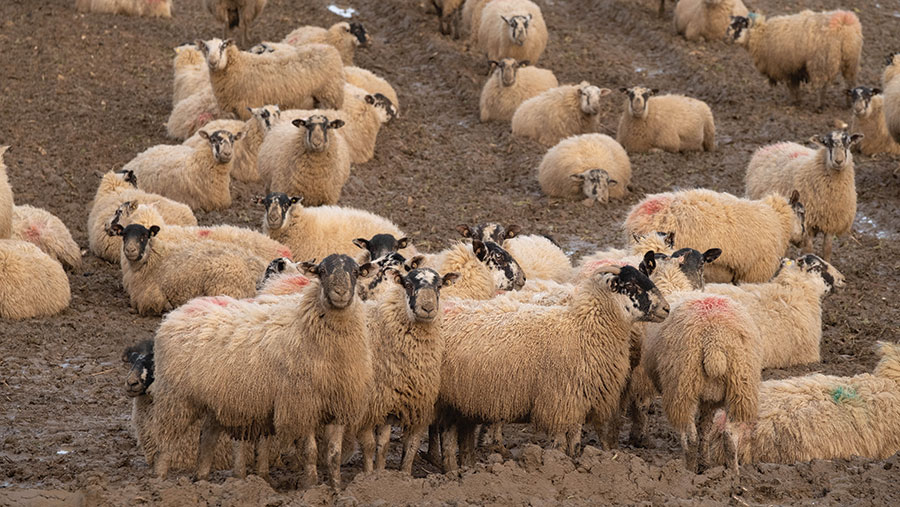 My family were big fans of the late Henry Brewis, the Northumbrian farmer, writer and cartoonist – featuring Sep, Gladys and the collie dog, Sweep – who farmed at the evocatively named “Clartiehole”.

After this winter, I have not only read about Clartiehole, I’m beginning to think I live there.

The storms seem to have continued week after week and the wind, rain and mud have been pervasive.

The marshy bits of the hill are saturated, as you might expect, but in addition, whole new areas of sludge have been left around the house and buildings, deposited by the runoff from our road.

See also: How to protect farm businesses against extreme weather

It isn’t possible to access the premises without your feet squelching and sinking into the mud, and the vehicles get filthy every time they move.

My dream home improvements now consist of a load of concrete and a pressure washer.

Of course, I know we have had it easy compared with many people in other parts of the country.

“Extreme” weather seems to be becoming normal. The type of flooding that was comparatively recently described as a “once-in-a-lifetime event” now just seems to be something that is to be expected and will have to be prepared for.

I caught part of Defra secretary George Eustice’s recent interview on the BBC’s Andrew Marr Show – you know, the one in which he said there was “room for a sensible discussion” about importing chicken washed in lactic acid into the UK.

The main part of the interview was on flooding policy, which seems to be under review.

Initially, I thought this would comprise a lot of officials quietly muttering “damn, damn, damn”.

To be fair, this would build on the existing policy, require no training or additional cost, and would probably be as effective as any other proposed measures.

However, I suspect Mr Eustice was actually talking about leaky woody dams, which are one of a number of soft engineering options for managing river flow upstream of the main towns and cities.

“Extreme” weather seems to be becoming normal. The type of flooding that was comparatively recently described as a “once-in-a-lifetime event” now just seems to be something that is to be expected and will have to be prepared for

Similar measures include tree planting near rivers, blocking upland drains and encouraging rough vegetation to slow the flow of water into the river system.

Upland farmers should be willing to engage with them as part of Environmental Land Management plans, both to do our bit and to develop solutions that are effective and acceptable to all parties.

Andrew Marr cited two experts who say the soft engineering proposals are simply not enough on their own and that they would be overwhelmed by the extreme weather events such as those we have been experiencing recently.

But they may be useful as part of a package of measures.

This would likely have to include hard engineering options such as building proper dams, widening or deepening river channels, or constructing relief channels, sluices and barriers.

There may also be a need to restrict developments on flood plains to buildings designed to be flood-proof, even if that is more expensive and thus politically difficult.

I await the Environment Agency’s revised strategy with interest. In the meantime, I’m just hoping for a break in the weather.