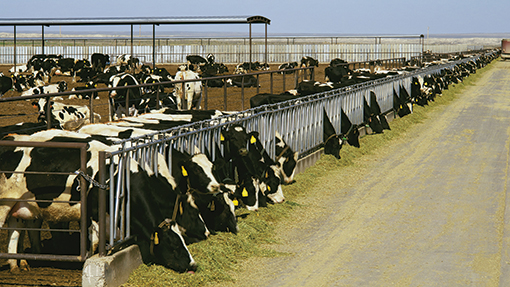 As the debate continues over whether large-scale farming systems are good for animals and UK food production, Caroline Stocks invites two experts to argue the cases for and against intensive systems through an exchange of letters.

At a time of rising demand for food and diminishing resources to produce it, farmers need to stay open-minded about how they can most efficiently use the scarce materials at their disposal.

With this in mind, I struggle to understand the Soil Association’s all-or-nothing stance on scale.

Why campaign so hard against the proposed 2,500-sow farm in Foston, Derbyshire, rearing thousands of pigs in efficient – yet what many would consider far more extensive – conditions than the norm?

Would it be acceptable if it was smaller? Or if it was the same size but used an organic system?

I do wonder if such a baby-out-with-the-bathwater approach is based upon neither science nor sense, but fear of obsolescence.

I’m not suggesting the Soil Association undermines its standards: that would do a great disservice to the many who choose to buy organic and would cut our wonderful diversity of production.

But it is possible to enter a debate without compromising one’s own beliefs.

After all, nothing undermines the credibility of an organisation more than its steadfast refusal to acknowledge – or worse still to continually fault – any open-minded or innovative thinking in others.

You are a partner in the AssureWel initiative to identify measurable animal welfare outcomes.

So what about starting to look at issues by their outcomes?

It may allow you to engage more widely at a time when open-minded and innovative approaches are what’s needed to solve the world’s problems.

As you point out, the Soil Association has been one of the pioneers of an innovative animal welfare programme called AssureWel.

It is vital that animal welfare standards are measured and actually achieve what they set out to do and this project aims to help farmers do that.

It is important that we don’t lose track of the bigger picture in such an approach, because individual outcomes such as feather loss in hens or lameness in cows do not tell the whole story.

This is why a “good life” framework has been developed by Bristol University which explores the welfare potential of a system in terms of the behavioural opportunities and choices available to an animal.

For example, free-range and organic systems provide pigs with the choice to root and freedom to exercise on the range.

There are inherent difficulties of delivering a good life to a huge group of animals. At Nocton, getting the dairy animals out to grass was impossible. At Foston, the system could only work if the pigs spend all of their time indoors.

I agree that in these turbulent times we have to be innovative about how we produce and ensure access to food while also protecting our environment for future generations, but the problems facing us will not be solved by super-sizing production.

Instead we need to pay our farmers a fair price for food, while expecting the highest standards of care for our environment, animals and health in return.

Large-scale industrial farms may be able to produce food a little more cheaply in the short term, mostly through reducing the number and cost of people employed, but the price we will pay for marginally cheaper food is high indeed.

I agree that relying on a narrow suite of welfare measures is a flawed strategy, but equally, unscientific predictions of what constitutes a “good life”, or rating one aspect over another, can lead to just as many, if not more, problems.

For example, if lack of opportunity for pigs to root could be a weakness of indoor systems (albeit one the industry is working to address), so is the risk of heat stress in summer and high piglet mortality in winter outdoors.

In this vein, I feel you view behavioural freedom in dairy cows as a more important outcome than mobility, a healthy udder and high survivability.

Yet cows would opt, I suspect, to be both alive and pain-free, and studies on whether a cow prefers to be inside or out, or to graze or be fed through TMR, are still in their infancy.

To date, they give a very mixed picture depending on weather, bed choice, feed facilities and rearing patterns.

So to malign an entire system on the basis of flimsy and conflicting evidence, while overlooking proven and positive health outcomes, does everyone, especially the cows, a disservice.

Lastly, large farms frequently use economies of scale to increase quantity and quality of staff rather than reduce them – because this benefits welfare and productivity.

Cows on larger farms are mostly managed in groups no bigger than an average farm here; the size of farm is of less consequence than the size and consistency of peer group.

There are many positive aspects to organic without having to knock others. If the industry set aside differences and worked together it could do a much better job raising the bar on welfare across all our farming systems. And who would say no to that?

It isn’t hard to define a good life for animals and to use science to tell us if it is being delivered.

We see no reason why we can’t give animals good health and access to the open air, to allow cows to graze and pigs to root. I would be interested to learn how that will be possible in concrete pens.

We don’t value behavioural opportunities and freedom of choice over health and welfare outcomes, but free range and organic systems have the potential to satisfy both, whereas intensive indoor systems – by their very nature – can only possibly satisfy the latter.

Another key issue in the development of huge-scale livestock farming systems is the potential human and animal health risks.

This was the basis for our objections – based on strong scientific evidence – to the proposed 25,000 pig farm at Foston.

Large-scale intensive pig factories give reason to be concerned about the build-up of antibiotic-resistant genes in pigs and pork, local wildlife, soil and pig workers, and potentially everyone living nearby.

Just under half of all antibiotics used in the UK are given to farm animals for treating or preventing the diseases caused by intensive farming.

Many of these are the same as, or closely related to, medically important antibiotics used in human medicine.

The use of the most modern and effective antibiotics in human medicine has been cut dramatically.

In English hospitals between 2004 and 2009, fluroquinolone use was cut by over 40% and modern cephalosporin use by 22%. In contrast, in the UK, farm use of both these classes of antibiotics increased by 16% in 2012 compared with 2011, and is now at record levels.

All farmers can work together to tackle this issue and moving systems to be less intensive is a key way of doing this.

Neither good health and welfare nor behavioural freedom is guaranteed on any farm.

Freedom of choice works both ways, and heat stress, elevated mortality and malnutrition can happen outdoors where inadequate access to shade, shelter and feed is provided.

No system is perfect and management is key.

The main cause of antibiotic resistance is also found rather closer to home than on farms.

The UK government’s Select Committee for Science and Technology recently concluded that clinical issues with resistance – note that resistance occurs in bacterial genes, not in animal, food product, wildlife, soil or human DNA – are primarily the result of antibiotic use in people, rather than in animals.

Furthermore, a 2011 Food and Drug Administration report from the USA found little cross-over between classes of antibiotics used in humans and animals.

While UK farms may be using “record levels” of new generation antibiotics, this should be viewed in context: combined, these products account for less than 1% of all antibiotics used in agriculture.

Scale and system are red herrings in both this and your wider health arguments, as demonstrated by the High Court’s recent decision to grant planning permission to a 1,000-cow dairy in Powys. Three years of campaigning by non-governmental organisations fighting this proposal failed to produce any reliable evidence to support the very arguments you raise here.

Organic farming provides a valuable contribution towards the development of more resilient farming practices, but equally there are large, “intensive” farms delivering exceptional health, welfare and environmental outcomes with minimal use of antibiotics.

No system is perfect, but organic and other extensive systems at least allow animals the opportunity to live a good life, denied to them if they spend their whole life confined indoors.

Most antibiotic resistance is caused by misuse of antibiotics in human medicine – but not all.

Farm use is important, but is the main cause of some of the problems.

The Commons Science and Technology Select Committee has just said “antibiotic resistance cannot be entirely prevented, but it is a problem made worse by inappropriate use and poor stewardship of antibiotics in healthcare and farming.”

Three studies just published provide evidence that the overuse in intensive farming of the critically important antibiotics, the modern cephalosporins, is contributing to the spread of resistance in E coli and salmonella.

It is wrong for intensive livestock advocates to attempt to continually downplay the extent of use of the critically important antibiotics (CIAs) in UK farming.

By weight of active ingredient CIAs only account for just under 1% of all veterinary antibiotic use, but this is partly because CIAs are potent antibiotics, and one dose can weigh many times less than one dose of some of the older antibiotics.

You started by saying we have a “baby-out-with-the-bathwater approach” to large-scale, indoor animal farming, “based upon neither science nor sense”.

In fact our position is supported by science, and the common sense of the majority of the public, who expect farm animals to have the chance to lead a good life.