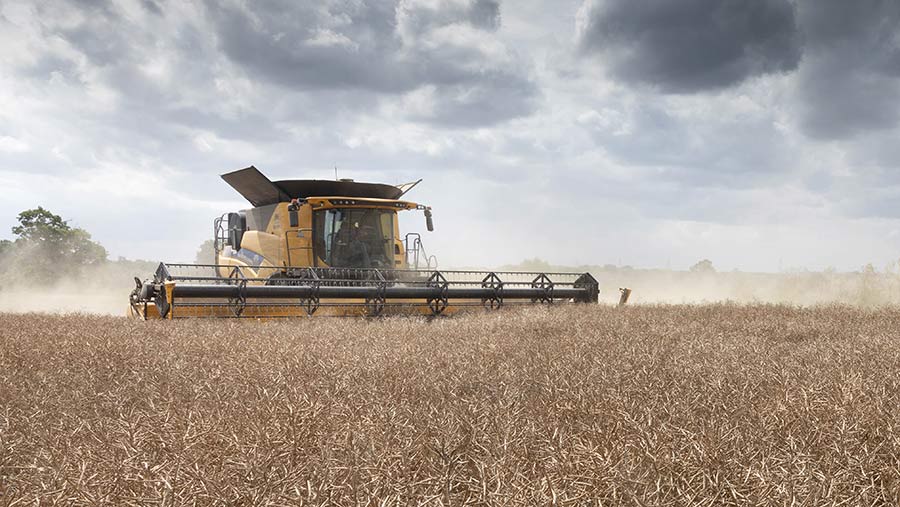 A recent poll on Twitter with the rather sombre hashtag #RIPOSR found that 46% of respondents will not grow oilseed rape again. I am one of them.

Well, I can’t say we haven’t tried. We even took a six-year sabbatical from growing it, only to have another crack last year.

This extended break showed signs of promise. The conditions had been perfect, with rain prior to planting and immediately after. Our decision was vindicated by an excellent harvest. It was good to be back.

But now we have had year two. Establishment was healthy on some fields, but very patchy in others. Adjacent fields planted on the same day varied hugely, with no rhyme nor reason to it, but it meant we were chasing our tail.

We redrilled, we held off herbicides, we watched the crop retreat. By March it was apparent that the 2020 oilseed rape harvest would be a salvage job.

Of course it will still be a viable crop for some. Others are concerned that the crush mills will close if there isn’t sufficient UK crop. But no more rape for us.

What alternative to consider is more taxing, especially in the context of a post-Brexit agricultural policy. My mediocre clay with flints in an area of relatively low rainfall is neither good for roots nor grass. I can, however, deliver huge areas of habitats for pollinators and birds.

If I accept that the break crop is exactly that, a chance for the soil to have a rest, the decision seems more straightforward.

But it is also prudent to remember how we arrived at #RIPOSR. When “black gold” was first grown on the farm in 1977, it was the break crop arable farmers had been crying out for (as we are now) – profitable and a good entry for wheat. This was a golden age for arable farming in the UK.

But it came with a consequence. A move away from spring cropping, a dramatic increase of pesticide use and, dare I say, a new era of farming that denounced diversity.

While we resisted the high-octane rotation of wheat, rape, wheat, rape, spring cropping still became a thing of the past. And that is probably why I am where I am.

Recognising that our declining soil organic matter, soil biology and increase in blackgrass was a symptom of a high dependency on pesticide and fertilisers has changed our approach. No insecticides, no till and no OSR.

We had fallen back into old habits (growing rape) because we were struggling to find an alternative that broke even. And here’s  the rub – I don’t want to farm a medicocre break that still demands its hit of pesticide.

I would prefer to plant something that builds fertility, delivers biodiversity and suppresses grassweeds.

Mid-tier Countryside Stewardship offers a two-year sown legume fallow (AB15), so once out of Higher Level Stewardship, we could consider this. But something with more flexibility would suit the mood, the time and have broader appeal.

The Environmental Land Management scheme is being devised to promote sustainable integrated farming. It is the perfect platform for the government to give farmers the option of a fertility build that delivers for the land and environment.

A one-year rotational option where the cost of seed is balanced against the public good benefits? Now there’s a thought.