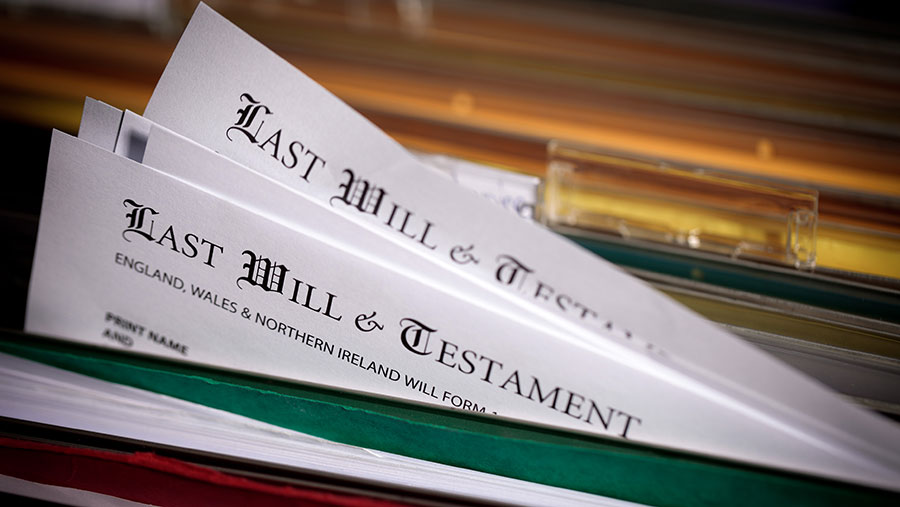 There are rites of passage which we all face in a farming lifetime. When I think back, there are several such milestones that have impressed themselves upon my memory.

Each one of these is a little badge of honour or dishonour.

In the early stages of a farming career, these signify the right sort of progress. They demonstrate that your prospects are ascending.

This week I have completed a particularly morbid one. I have written and signed a proper will (42).

This has left me obsessed with death and inheritance. There are many weeks when you read Farmers Weekly and someone is talking about “succession planning”. The noise on this subject invariably emanates from the mouths of young people and lawyers.

This is because they are “the beneficiaries”. Now that I have been through the experience, I can tell you that it isn’t much fun being the “corpse-in-waiting” on the other side of the transaction.

I now feel less like a human and more like a wallet with arms and legs. When my younger relatives look at me, I see an expression in their eyes that reminds me of a dog looking at a hot, unattended pork chop.

My father and I both undertook our will writing at the same time. Our solicitor started by asking how we would like our affairs to be ideally left after death.

Dad folded his arms and said, plaintively: “Well, I don’t want to die so I can’t see why you are using the word ‘ideal’ in this context”. Fortunately for him, we have several cold stores powered by photo-voltaic panels on a very good Feed-in Tariff. Cryogenic preservation could prove a highly profitable option here.

Young people are blissfully unaware that it becomes harder and not easier to accept death as you approach it. This is why succession planning is such an unpopular topic.

When you write a will, death suddenly stops being a distant and abstract hypothesis, such as fossil fuels running out or Donald Trump being elected US president. It suddenly becomes a certain, terrifying and rapidly approaching possibility.

The way to go

When I was younger, I imagined that I would slip away on a sunny afternoon having just won a tennis match and during my second glass of champagne (a sprightly 92). Since writing a will, the clock has started ticking more quickly and I have a much greater sense of my own mortality.

I hope that when my number is called, I am fortunate enough to die either of my grandfathers.

“While I do not respect them, I find it easy to sympathise with farmers who find it impossible to write a will” – Matthew Naylor

My paternal grandfather, a keen gundog breeder, died while competing at a field trial. His Labrador was running well and he had just eaten a second helping at lunch; a fair (though not entirely certain) indication that he had enjoyed the first helping. He left for a nice day out and never came home.

My maternal grandfather died in his armchair while having his customary afternoon nap. In a twist that would have thrilled him, he had £1,000 in cash in his back pocket.

This was his final joke. My grandma only remembered after the undertakers had arrived and it turned into a scene from an Ealing comedy when she asked me if I would attempt to retrieve it.

In some ways, death is the easy bit. The hardest part is deciding how to leave matters once you have gone.

Deciding how to leave everything

The difference between treating people fairly and treating them equally is a complex conundrum. This requires even more consideration when most of your wealth is invested in expanding businesses that operate in volatile markets.

For many farmers the problem is compounded where they have a large balance sheet of assets, such as farmland, which are failing to realise an economic rate of return. Suddenly, one starts to see that the matter is not as simple as it first appears. While I do not respect them, I find it easy to sympathise with farmers who find it impossible to write a will.

Wrangling with these thoughts left me certain of one thing. There is quite enough boring paperwork in the world already and wills should always be an interesting read for the people left behind. You should always put a little surprise in there.

My great granddad, Herbert Newton, had a novel solution to distributing his assets. He left a reasonable lump of his cash to the Catholic Church, but among his physical possessions was a particularly grand piece of mahogany furniture that had been in his family for some time.

Great Grandpa Herbert was a socialist and so he decided he should simply saw this piece of furniture into four pieces – one for each relative.

Unfortunately, Great Grandpa Herbert was blind. His carpentry was conducted with rather less skill and precision than one might have expected from one of Sir Isaac Newton’s closest relatives. We refer to this as the Newton theory of partible inheritance. It is quite common on farms in France as well, I understand.

Under the Napoleonic Code, farms are split equally between family members. This practice seemingly continues until such time as the fields are each as small and useless as one-quarter of a mahogany sideboard.

Pondering all these morbid thoughts is actually quite a healthy process. It is good for the soul to stop and think about a world that doesn’t have you at the centre of it. Human life and agriculture will survive long after we have all been returned to the various elements of which we are composed.

Keeping this is mind is perhaps a good way of putting the daily pressures of a farming life into some sort of perspective. Paying a little thought to your death might actually be the best way to discover the true purpose of your life.