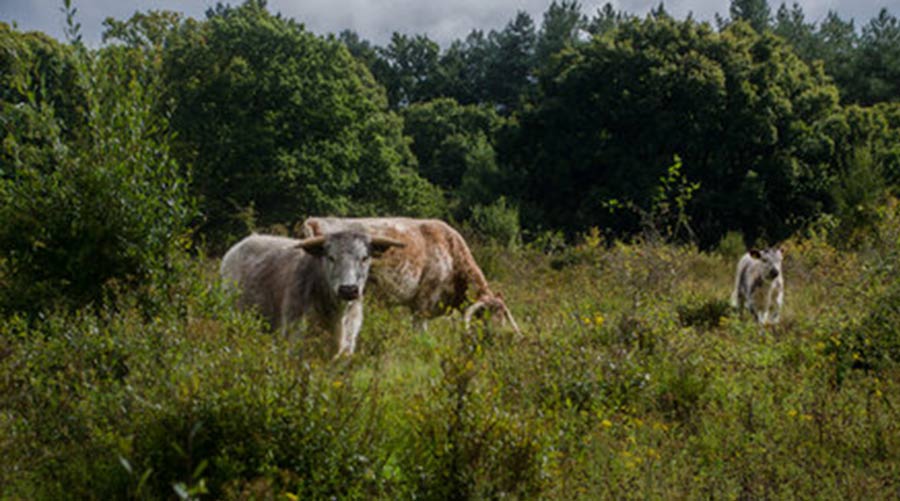 Britain, I am fond of saying, is a cultural landscape. Farming created it, pushing back the primeval woodland to grow crops and keep livestock.

By Roman times most of Britain was sparsely wooded, save for some areas like the Weald.

Farming maintains this landscape, from the Essex wheat fields to the Scottish Highlands.

Take away the plough or the cow, and where trees will grow it all goes back to woodland. Nice, but nothing like as diverse or valuable for wildlife.

Much of what we do for conservation as farmers and countryside managers is battling this process of ecological succession.

People with animals, mowers and billhooks try gamely to keep areas of the Kent Downs open for wildflowers and butterflies.

Turns out I’m wrong, and so are they. The 3,500 acre Knepp estate in Sussex has turned back succession, by “wilding” – abandoning its farmland and allowing it to be managed solely by grazing animals, in big groups – cattle, deer, horses, pigs.

Grazing, browsing and trampling by these animals keep Knepp in a state of permanent post-ice age vegetation.

Then, the new theory goes, there was not dense wildwood, but more a mix of groups of trees, scrub, open areas and other habitat like wetland.

But we humans turned up, and hunted like a fox in a hen run, until the large herbivores were extinct or reduced to relict populations.

Their descendents died out or became “rare breeds”. Without them, the woodland closed in.

So the micro-management of isolated sites, the Knepp philosophy suggests, is hopeless. To turn back succession we need big areas, where natural processes are simply allowed to happen. Then you will get your wildlife back.

Knepp isn’t a wilderness. Judicial choices are made for livestock breeds on the basis of what a Sussex footpath walker might cope with.

There is human intervention in animal numbers, for welfare and meat consumption. And big fences.

But it’s challenging stuff – to both the conservationist and the farmer in me. Indeed, the Knepp project battled the incomprehension, not only of its farmer neighbours, but of many in Natural England, rooted in traditional approaches.

Tidiness is not next to godliness when it comes to wildlife conservation, and Knepp is massive untidiness.

The species that benefit are those that love scruffy countryside. Some are rarities like the turtledove and nightingale that we are failing to conserve in our present agri-environment schemes.

The problem with these schemes is that everything has to tick the box. Field margins and hedges are an exact width; a field is grass or woodland, not both.

This is the basis of both the Stewardship and Basic Payment Schemes – define, limit and keep under control. You risk your payments if you don’t.

Knepp has been lucky in getting Stewardship support, making some timely decisions, and having the resources of a large, diversified estate to back it up. Nor is it an invitation to abandon arable cropping.

We can’t all become hunter-gatherers again, turning the British landscape over to free-range, shoot-it-yourself livestock production. But Knepp shows big wilding projects scattered across the landscape could make a difference.

And it teaches us that we often not only fail to understand that nature has evolved in complex ways, but actively try to work against it.