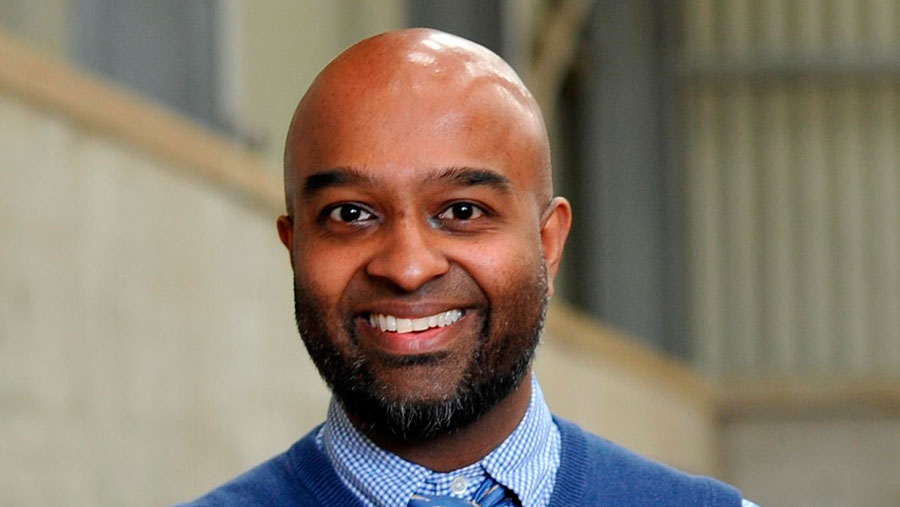 After meeting someone for the first time, as part of the initial conversation, the question “Where are you from?” often pops up.

My answer is usually “Scotland”, although sometimes I say “the UK” when abroad. This is usually enough for most people, but then I sometimes get: “But where are you really from?”

The main difference between me and 86% of the UK is my skin colour. So the assumption of the questioner is that I must be from somewhere else because of how I look.

I was born in Scotland, have a British passport and have lived here all my life, so why am I suddenly from somewhere else?

See also: The A to Z of careers in agriculture

Being both a dairy veterinarian and senior lecturer in livestock production, the majority of my life has been involved in the agricultural sector.

I work with livestock and teach the future generation involved in farming. This means I have met many different people in the industry. It’s a sector that I am very proud and passionate about.

The vast majority of people have been truly amazing and have treated me with warmth, friendship and respect. But, unfortunately, there have been situations which have led me to feel isolated and uncomfortable.

My experiences include having had a farmer refuse to have me on farm based on my skin colour,  hearing a student describe people from another ethnicity in a defamatory way, and hearing qualified vets use racist terminology in conversation.

Excuses such as “but I have a black friend” or “but I have been to India” have been used as justifications for certain people’s attitudes.

Thankfully this is at the extreme end of the spectrum and is not as widespread as the more common racial and religious misunderstanding I have to endure as an almost daily occurrence.

With regards to the veterinary profession, a colleague and I launched the British Veterinary Ethnicity and Diversity Society (BVEDS) in 2016 after I had previously tried, unsuccessfully, to highlight the problems of ethnicity and diversity among vets.

In the past two months we have been successful in getting recognition from the Royal College of Veterinary Surgeons and the British Veterinary Association that this is an important issue to address, and they have now agreed to work with us on this subject.

A majority of farmers live in rural communities and so do not always have the opportunity to meet and talk to people from Black, Asian and Minority Ethnic (Bame) backgrounds.

Some views and opinions are therefore obtained from the media, or listening to people with outdated views. I understand this, but we have to try and break down these barriers and ideas.

The UK is a small place with a rich mix of people. With labour leaving the farming community, we need to encourage people of all backgrounds to see farming as a viable option for employment.

The only way to do this is to make farming a career that is both welcoming and understanding. This will not happen overnight, but needs to start somewhere.

So back to the original question. I assume the person asking “where are you really from?” is probably innocent, but it seems to be a question that gets asked only of someone with a different accent or skin tone. It makes the respondent feel unconnected to this country.

My advice would be to stop at the “where are you from?” question and don’t add the word “really”. If you get to know someone well, you may find out more about their heritage without having to even ask them.