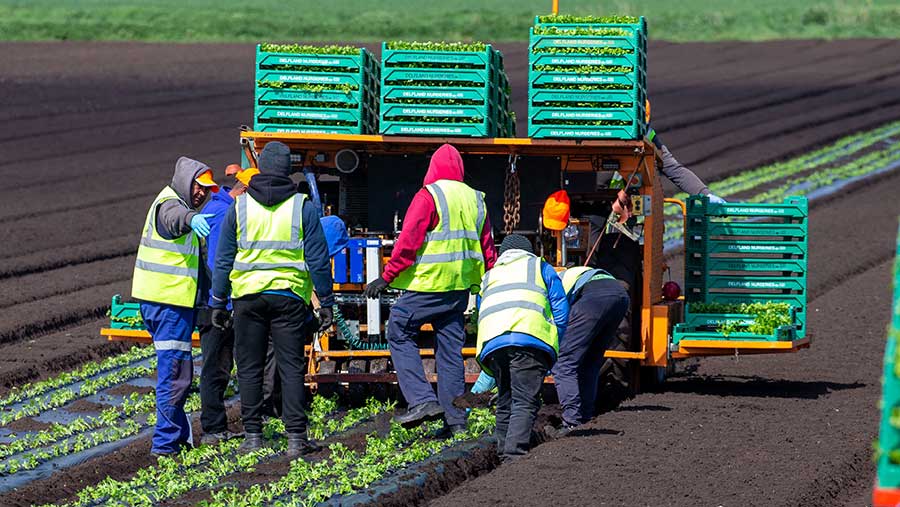 As farmers, few of us will have been surprised that the recent attempt by the government to raise a “land army” of UK workers to replace the 80,000 migrant labourers, on which British agriculture and horticulture have come to depend, has failed.

Instead, with an alarming number of farm work vacancies remaining unfilled, and despite the difficulties presented by coronavirus of moving people between countries, aircraft are now being chartered to fly planeloads of foreign nationals to the UK.

Once here, they will milk our cows, pick our strawberries and sort our potatoes.

See also: How to find seasonal work on farms

We are painfully aware, as farmers, that farm work increasingly turns British citizens off.

Low pay is an important factor, but no matter how poor the terms and conditions that might be on offer in other sectors of the economy, such as hospitality or the casual employment provided by the so called “gig economy”, farming still isn’t seen as sexy.

It’s not as if our young people are lazy or work shy. Far from it, they are as motivated to get on with work and a career, as earlier generations ever were.

It’s just the nature of the often repetitive, dirty and dangerous work, in all weathers in solitary locations, that undermines farming’s appeal.

When I started farming in the mid-1970s, working conditions on farms were much worse than they are now.

My first job on my father’s farm was as a 14-year old. During the long school summer holidays, he used to put me chisel-ploughing stubbles behind the combine harvesters.

Sat on a Ford 5000, my only protection from the dust bowl the plough created was a crude Duncan Cab that simply trapped the dust inside as it swirled up from the rigid tines.

I’ve cocooned my own children from such experiences because of my anxiety at putting them in any danger. Besides, health and safety legislation insists that I must not, even if I were minded to.

Modern tractor cabs are obviously hugely improved, but my children will now pass right through their teens and beyond with barely a week’s tractor-driving experience between them.

With large-scale UK fruit and vegetable growing, conditions and especially accommodation are often geared to migrant workers used to such work in their home countries, rather than local workers

Hampshire farmer and broadcaster John Cherrington maintained that milking cows twice a day, 365 days a year, was something that had to be imposed on children before they knew any better.

Few British children are now weaned on to milking in this way, which is why floor plans for UK super dairies often show a dormitory for workers flown in from other countries.

Similarly, with large-scale UK fruit and vegetable growing, conditions and especially accommodation are often geared to migrant workers used to such work in their home countries, rather than local workers.

Fifty years ago, before most women left the home to find paid work, fruit and vegetable growers often sourced labour from a ready local pool of females. They would turn out in all weathers, grateful for the cash and keen to escape lonely, mundane housework.

So, while improved farm pay and working conditions might help British farmers recruit British workers, there are other long-term social and educational trends under way that will make it ever harder for us to do so.

We might like to think that Britain can once more bring its own harvest home through the labour of its own citizens, but the coronavirus crisis has shown that those days are long gone.