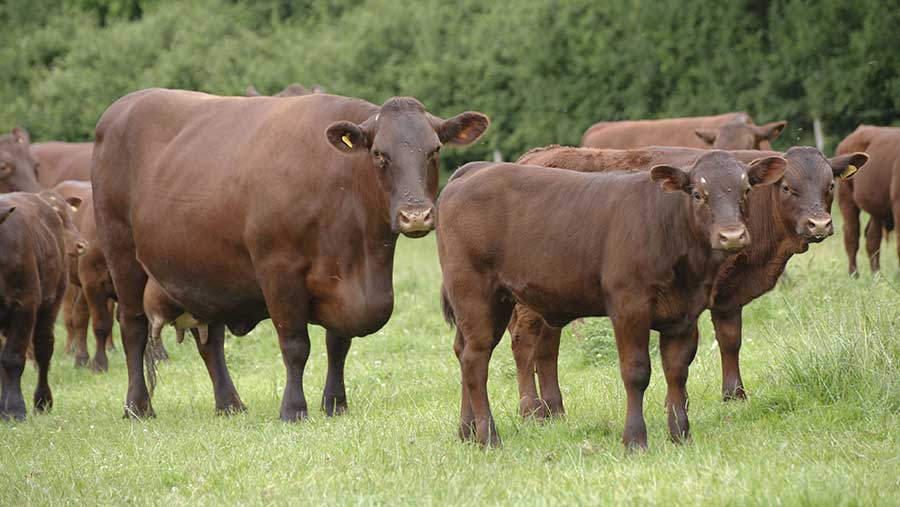 I am being left hopelessly behind by my farming peers.

This is the only conclusion I come to if I read through the technical section of Farmers Weekly.

The arable pages feature superhumans who speak a language littered with acronyms about precision-farming gizmos that I barely understand. They refer casually to kit so expensive and large that my only thought is, “no wonder British farmers have now borrowed nearly £20 billion from the banks”.

The livestock pages are equally alarming, with the emphasis on everything growing faster and finishing heavier.

See also: Opinion: Farmers could be ‘sleepwalking into a mincing machine’

Imagine my delight then to stumble across an article in the livestock section of a recent edition that gave me some rare comfort.

To my great joy, Mr Pritchard has concluded that bigger suckler cows are much less efficient than smaller ones.

He advises that we should never keep the biggest heifers to breed from. He even goes so far as to suggest that breeding replacements selected from sires with a high genetic merit for 400-day growth may seriously undermine efficiency in suckler herds.

Put more simply: the larger the cow, the more she eats.

Although she will eventually be culled at a heavy weight, Mr Pritchard asks the pertinent question: “How much has she cost to feed over her lifetime?”

As someone who – much to the alarm of my local livestock auctioneer – has recently abandoned big continental-cross suckler cows for purebred Sussex cows, this is all music to my ears.

From the auctioneer’s rostrum it may seem obvious that the big steer derived from, say, a Simmental-cross Holstein-Friesian cow that grosses £1400 is more profitable for the farmer to produce than the smaller steer from a purebred Sussex cow that only grosses £1300.

But, like so much in farming, things are seldom what they appear.

Not a kilo of concentrates

I have just emerged from a very dry open winter with my herd of Sussex cattle, where my light-footed cows remained at pasture on marshland until 29 January.

They were then moved to the top of the South Downs, where they were fed very plain hay in the corner of a field until they calved down in a yard from the beginning of March.

Hard to believe though it is, without a single cow having access to a kilo of concentrates all winter, they all calved down in good condition and produced healthy well-grown robust calves for which they had plenty of milk.

Imagine attempting that with a herd of large purebred continental suckler cows, let alone ones that had been cross-bred with a Holstein-Friesian?

I’ve not attempted one of my of course it’s accurate back-of-an-envelope calculations to see how much it actually cost me to take my 60 purebred Sussex sucklers through the winter.

Why do I need to?  I know it was dirt cheap. The cows were fed for just eight weeks. They saw no hard food all winter. Being so petite, they didn’t eat much hay even when it was put in front of them.

When briefly yarded, they did not require much straw or create much in the way of manure that subsequently has to be spread back onto the land at considerable expense.

And it’s not even as if my small cows produce small calves. They can be crossed with any breed I like and, as Mr Pritchard reminds us: “A small cow is just as likely to produce a big calf at weaning.  Growth rate of the calf is driven by milk not cow size.”

So, it is with repaired confidence that I now risk scouring the technical pages of Farmers Weekly.  I’ve learnt that if you look hard enough, not every article leaves you with a raging inferiority complex.