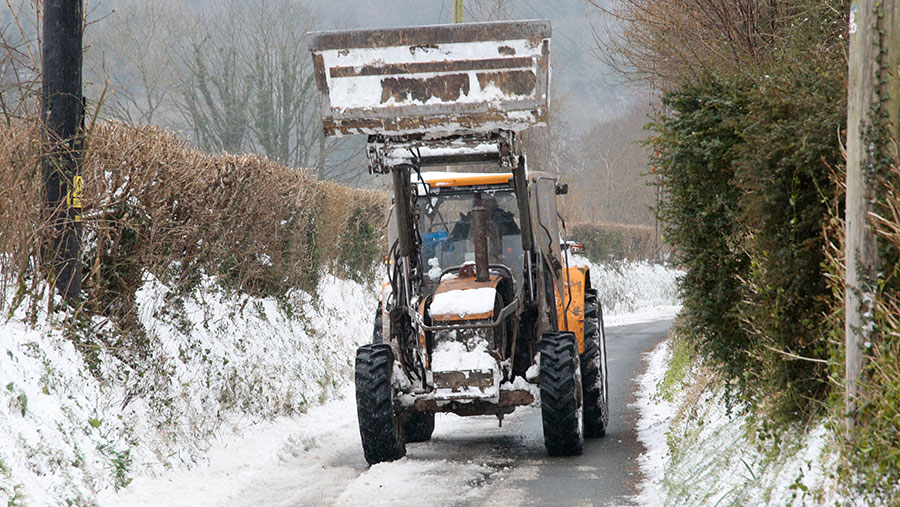 So I’m feeling smug I’ve now added to my own repertoire of weather stories to regale to future generations under the spine-chilling title “the Beast from the East”.

In hindsight, the weather we experienced in the first week of March 2018 probably wasn’t that notably catastrophic, but with a title like that I’m sure with the passing of time those snow drifts we encountered will become several metres taller.

See also: Opinion: Farming keeps the wolf from the door

What was particularly heartening about how the media covered “the Beast” in news reports was the constant acknowledgement of the key work voluntarily undertaken by farmers.

My own little moment on the moral high ground came when we dug through half a mile of private road to relieve a small community to be met by very grateful couple called Keith and Annette who exclaimed “thank goodness you’ve got through, we’ve both just run out of our heart tablets”.

It’s moments like that which put a spring in your step. Just like the thousands of other farmers who went “above and beyond” a fortnight ago, for me no further reward was necessary.

Being able to help others in need is reward enough. And let’s be clear, it wasn’t just the farming community who came to the fore at the time.

I was particularly struck by a news interview with the A&E doctor who had walked 10 miles to get to the hospital. The nice thing about a crisis is it brings out the best in people.

What did distinguish the response of the farming community at this snow-bound time was we didn’t just turn up with goodwill, we also turned up with some rather large tractors and loaders.

When it comes to entrenched juggernauts or 6ft snow drifts, it doesn’t half help to have some expensive machinery up your sleeve.

As one journalist put it: “As the world ground to a halt, a mechanised army of liberation emerged from the farmyards.”

Quite rightly, none of us want payment for the good works we undertook, but it might be useful to estimate its worth.

This is particularly so at a time when government advisers want farm support to be based on the principle of “public money for public good”.

The simple fact is farm support keeps farm businesses viable, which in turn affords us things such as large tractors and loaders.

That’s the problem with concepts such as “public good”. It’s very dependent on who decides what is or isn’t a public good and how much it is worth.

I’ve yet to hear them monetarise the freeing up of thousands of miles of minor roads, or getting heart tablets to Keith and Annette.

To be clear, I’m not trying to justify a £3bn annual spend of government money by reference to some voluntary snow clearing. Nor am I suggesting we should be afraid of new ideas when it comes to agricultural policy going forward.

However, it does no harm to gently remind politicians and policymakers alike that a robust farming community can deliver public goods that are easily overlooked and that public money cannot easily buy.