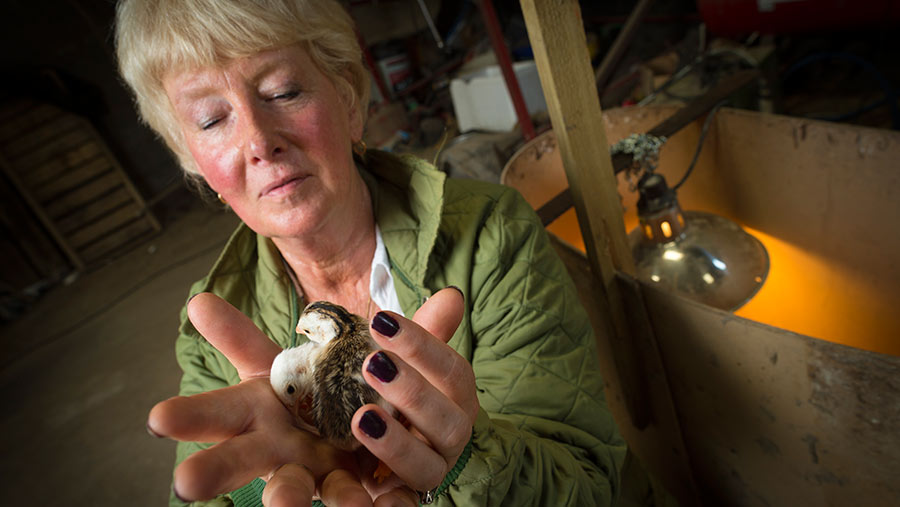 Days on our farm rarely pan out exactly as planned. I  have recently taken a solemn oath not to set any more eggs under broody hens.

My dedicated mums are currently rearing a motley crew of guinea fowl keets, bantie chicks and a solitary turkey poult.

That was it, I promised. Until this morning, when I went into the old milking parlour to rummage through a freezer for a pack of frozen plums to make a lunchtime pudding.

Crouched on the floor of the old dairy was a small black bantie. From beneath her, two tiny chicks peeped their alarm at my approach. She ruffled up in defensive mode.

Risking a perforated hand, I gathered mum and chicks and gave them a temporary home in a cardboard box. Then, returning to the freezer, I heard the faintest of peeps from somewhere in the building. Was I losing it? A ghost chick?

Although I turned over every box in the parlour, there was no sign of a chick until I spotted an old blackbird’s nest tucked up in the eaves. I clambered up a stepladder to check in the nest, but found nothing but broken eggshells. No sign of the peeper.

Until suddenly a tiny golden bundle dropped at my feet. Followed by a second ball of fluff. Looking up, I saw a third chick about to launch itself from a platform that held a refrigeration unit from the old bulk milk tank, high up in the roof of the shed.

Were these chicks related to barnacle geese, I wondered? It might not have been a 400ft leap off a cliff, but was still a fairly impressive jump for a tiny chick.

Just in time I caught number three and took the tiny clutch to mum – who pecked my hand again. No gratitude. When I looked, there were still four or five more eggs in the nest and these are now in my incubator, with two of the eggs already hatching.

Helping me set up new pens is not, however, a sufficient distraction for John, who is waiting to start harvest.

It has been raining hard in our part of East Yorkshire, wiping out thoughts of harvest for the next few days, but it is certainly not raining in the required abundance to dampen the ardour of our dogs.

Fizz has become positively rotund for a border collie. Millie, the Jack Russell – notoriously picky about her food and preferring a standard diet of meat, meat and even more meat – has even been glimpsed snaffling the odd biscuit out of the dog bowls (although she quickly drops said biscuit if she thinks she is being watched).

After all, standards may drop and if we thought she would be content with a mere proprietary biscuit, the menu options would take a distinct downturn in her eyes.

The chickens, too, have become addicted to the new biscuit mix. Our flock of assorted bantams must, at some stage in their evolution, have been crossed with vultures, as they can be relied on to clear up and scavenge any bowls left out for the dogs.

This marauding flock is oblivious to canine threats and will steal any dog food left momentarily uneaten.

None of our current dogs have had a litter of puppies. John is against them being spayed on the grounds, unfounded maybe, that it will stop them being effective workers.

So instead I have taken them twice a year to the vets for an injection to stop them coming into season. But this year, one month after the new biscuit mix was introduced and ahead of the time when our  bitches usually come into season, they have all come on heat.

It is driving us crazy, as a neighbour’s dog is now besotted with our girls. We have even had a visit from a rather raggy-looking terrier that was staying on a camping site over a mile away.

These dogs apparently don’t sleep and, as a result, neither do we. They howl with desire. We howl at them to shut up.

Meanwhile, our dogs flaunt their charms from the safety of their runs and appear to be thoroughly enjoying all the attention without suffering any of the consequences.

Desire has apparently slightly dampened their appetites and consequently the chickens have been stealing even more of these possibly aphrodisiac biscuits.

As a result, chickens and cockerels are shamelessly cavorting round the farmyard and crowing vociferously from about four in the morning.

All this is in stark contrast to our bull’s enforced abstinence from carnal pursuits.

To prevent him bulling his own progeny, now consisting of what he clearly sees as rather attractive seven- or eight-month-old heifers, he is living in the fold yard with several bullocks that are being finished for market. But he has clearly bred some good stock.

Observing the athletic cavorting, racing, vaulting and leaping around of his calves, it came to me that we should just stop mucking about sending all these two-legged athletes to the Olympics and try entering some of our four-legged athletes instead.

If you want a real turn of speed across 100 metres, a calf would soon bring a gold medal home.