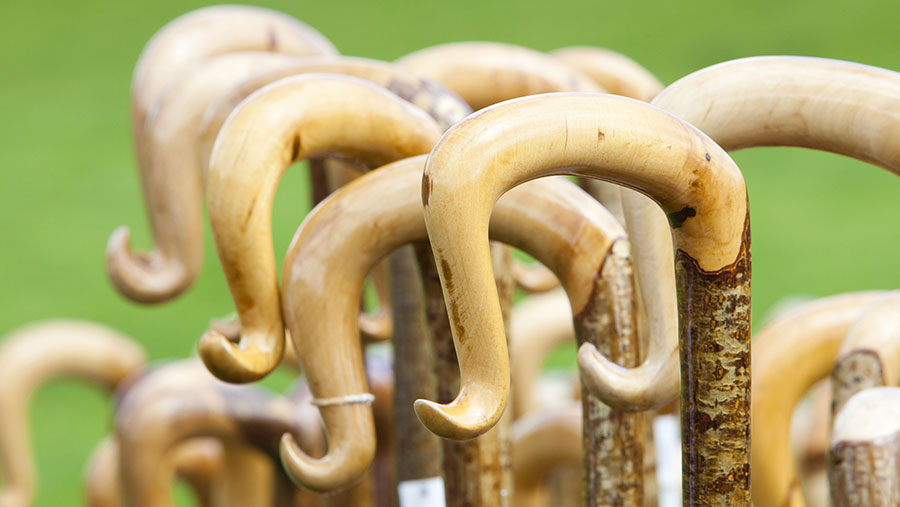 It was nearly a year ago that my wife surprised me with a combined present beneath the Christmas tree in the form of a Border Collie puppy and a hand-carved ash walking stick.

“All I’ve heard since the referendum in June is  Brexit means we will have to change to a ‘dog and stick’ style of farming – so now you can get on with it,” she said with relish.

With my five daughters all at home for the holiday season there was then much debate about a name for my puppy bitch.

For some inexplicable reason I had fixed on calling her Barbara (to be shortened to “Babs” in the field when we were rounding up the sheep). But this, and several other trial names, were rejected as too “boring”, “annoying”, “predictable” or “silly”.

In the end, after much heated discussion, 52% of us managed to agree on a name: my poor little puppy is called “Brexit”.

“Brex”, my stick and I now ride around the farm together in my trusty 1980s Land Rover as I try to make my farm ready for Brexit (as if such a thing is possible given so many unknowns).

The great and the good, of course, tell us that being ready for Brexit means we must invest in the very latest equipment and learn about cutting-edge production techniques to improve our farming productivity.

Only in this way, everyone tells us, can we expect to bring down our unit costs of production.

And only then will we be able to compete with the cheap grain, lamb and beef imports that will flood into the UK as soon as we leave the protective umbrella of the CAP and the EU customs union.

Opposing the great and good

It’s a rule of thumb of mine that, if the great and good are telling me to do something, I do the exact opposite.

And dog-and-stick-style farming is the exact opposite of what the farming establishment is advocating for UK agriculture (albeit the last time UK agriculture was exposed to free trade, between 1920 and 1940, it was the only way most farmers could survive).

Dog and stick farming, of course, is an extensive style of farming whereby farmers put ring fences around their farms, sack their employed labour, refuse to spend any money on anything and live off what the land will grow with the absolute minimum of inputs.

This is the stuff of nightmares for everyone except the farmer.

The AHDB, for instance, charges farmers levies on each unit of production, so dog and stick is an existential threat to the board’s £40m levy income.

A collapse in machinery and other farm input sales would threaten employment in manufacturing and the wider rural economy.

And a decline in farm production would only exacerbate the UK’s already alarming decline in food self-sufficiency.

On my farm, so far, my dog-and-stick policy has seen a near complete moratorium placed on machinery expenditure, my part-time shepherd made even more part-time, and me working much harder on day-to-day tasks with less reliance on agricultural contractors.

Brex, for her part, is thoroughly living up to her name. Whenever I leave her in the cabin of the Land Rover on her own she chews at the dashboard, the seat covers and most recently (and expensively) the seat belts.

When I let her out of the truck she rushes headlong towards the flock barking wildly and incoherently. As much as I shout “Stop, Brexit”, she carries on regardless.