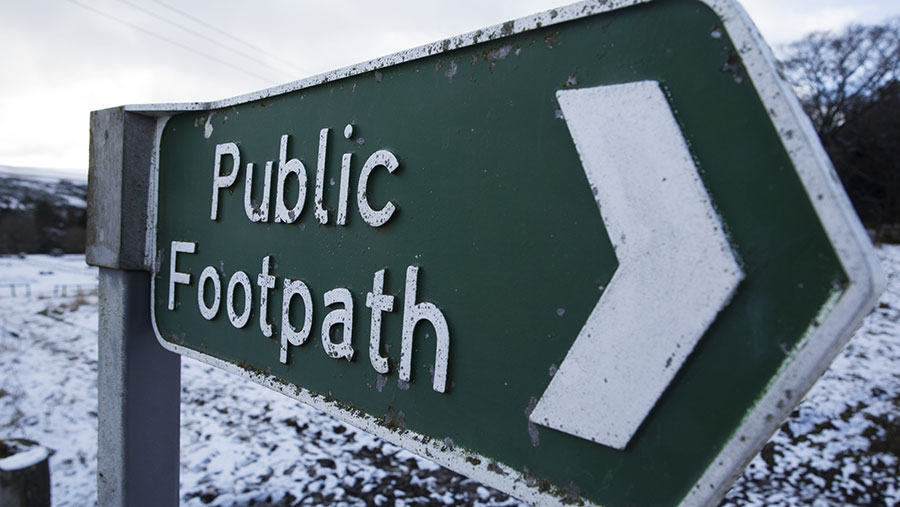 The Countryside Code is an irrelevant etiquette.

It is the view of small minority, who believe the countryside is theirs to do as they wish, farming is an inconvenience and any “rules” are not applicable to them.

And it is creating a tension damaging to agriculture.

See also: English lamb with all the (imported) trimmings

Confusion over what public access means and where it exists suggests a fresh approach is needed to communicate the Countryside Code so footpaths are a conduit for community harmony between walkers and farmers, and not a corridor to conflict.

It needs a radical rethink.

The historic raison d’être for most footpaths no longer exists.

They were the shortest-walked routes between two places; be it settlements or churches.

Today, footpaths are used for recreation, by walkers, dog walkers, and people enjoying the countryside.

The rules protecting their routing and access need to be updated to reflect this.

Routes should consider three things: the farming activities, the walker and the countryside.

Currently, the farmer’s activities and the countryside are being compromised by the historic rights which too many abuse – people treat them as an excuse to walk where they wish and let dogs roam free through protected habitats and livestock.

Rerouting paths around the perimeter of fields and rationalising them where a large number exist in a small area, should be considerations.

A recent exchange with a couple walking across one of our Higher Level Stewardship pollen and nectar margins began with a cheerful greeting. “Good afternoon,” I said “I am very sorry, but just so you know for the future, there is no access across these margins.”

“That’s a shame,” she replied.

I elaborated, explaining which species we were trying to encourage, how we look after them and why walking on them upsets the ecosystem, hence why it was not allowed. I explained there were alternative footpaths they could use.

“That’s a shame,” she said again, “because the footpaths are not in the direction I want to go.”

This entitled attitude is not unique. Both parties left the exchange frustrated.

My words and explanations were merely an inconvenience to their recreational experience.

And I I have no doubt I will see them walking around these margins again.

We must seek to change this impasse.

There are also more serious trespass issues affecting too many livestock farmers.

Growing numbers of dog owners see no need to keep their pets on leads around farm animals.

One recent reported suggested as many as 15,000 sheep were killed by loose dogs in 2016.

These numbers will increase until there is a change in education, attitude and or regulation.

Since 2004 dog numbers in the UK have increased 26% to 8.6 million and yet precious few of those owners know their responsibilities around stock.

This is despite efforts asking that footpaths are respected, including Linking Environment And Farming information boards and more clearly marked routes.

In the event an individual needs to be asked to control a dog or stick to a footpath, the farmer is seen as the villain in the piece.

For this reason it would be wrong and probably ineffective for the farming sector to front such a campaign.

Farming needs to work with charities such as RSPCA, RSPB, and the National Trust to engage the British public to help them understand why the Countryside Code exists and empower walkers to self police.

In the wake of Brexit, this is an excellent opportunity for a multitude of organisations, with a vested interest, to show government why supporting the vibrancy, health, education and access of the countryside is relevant to all.