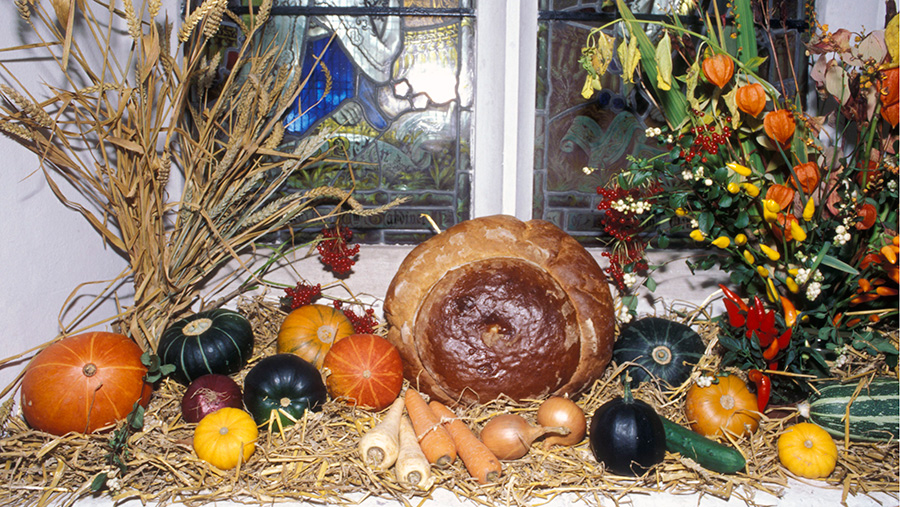 When I was a boy, our village church would be full of farmers for harvest festival.

Most didn’t come near the place for the rest of the year, but thanksgiving for the harvest was a must.

The church was decorated with sheaves of wheat and barley straight out of the self-binder.

There would be sacks of potatoes freshly lifted from the fields, bunches of carrots and parsnips tied with string and buckets of different varieties of apples.

The window ledges would be decorated with colourful autumn flowers.

Most of the vegetables, fruit and flowers came from non-farming members of the congregation who took pride in their gardens or allotments because in those days almost every household grew most of what they needed and ate it in the appropriate season.

On the Monday evening, following the Sunday services, all the donated produce would be gathered up and auctioned.

People from the city would often join us on those occasions and would return home with cars full of fresh fruit and veg.

The proceeds of the auctions would be given to old people and the poorest in the village.

David Richardson farms about 400ha of arable land near Norwich in Norfolk  with his wife Lorna and his son Rob.

It’s very different today. First of all, there are fewer farmers and I am the only one in our congregation.

I make sure there is at least one sheaf of wheat on the altar.

I also lay a few sugar beets beside the sheaf which, most churchgoers believe are big parsnips until I tell them otherwise.

But there are village churches not far from here, never mind those in towns and cities, that have no recognisable farm produce for their festival services.

These days, most of the gifts brought by congregations are things such as tins of peaches or pineapples or other exotic fruit that were originally grown in the tropics.

The nearest I’ve seen to fresh produce in recent years was a bunch of bananas, that were clearly not grown in Norfolk.

But convenience is king and it’s easy to transport such stuff to the local food bank.

Most gardens consist of lawns and flower beds today because it’s cheaper to buy vegetable prepacks from Tesco.

Allotments do still exist. There are few in this village, but none of what they produce finds its way to our church.

And whereas in the old days if it was a late harvest and the service was held early, some would refuse to sing “All is safely gathered in”, most today wouldn’t have a clue about the progress of work on farms.

What a sad commentary on the disconnect between those of us who produce food and those who consume it.

Some of us do our best to bridge the gap, but all too often feel we are not taken seriously.

Our largely urban neighbours have little or no appreciation of the problems we face.

For instance, a member of our church commented to me a few weeks ago on a rainy Sunday morning that it was terrible weather.

I replied that, yes it was unpleasant but that after several weeks of dry weather the crops needed a soak. You farmers are never satisfied, he retorted.

That period of fine weather was great and now you’re pleased it’s over, he added. I wondered whether to remind him that I was happy with the rain, but decided not to bother.

I fear most UK farmers who do attend harvest festivals will be there in thankfulness for the decline in the value of sterling making exporting easier and, perhaps, making farm commodities profitable.