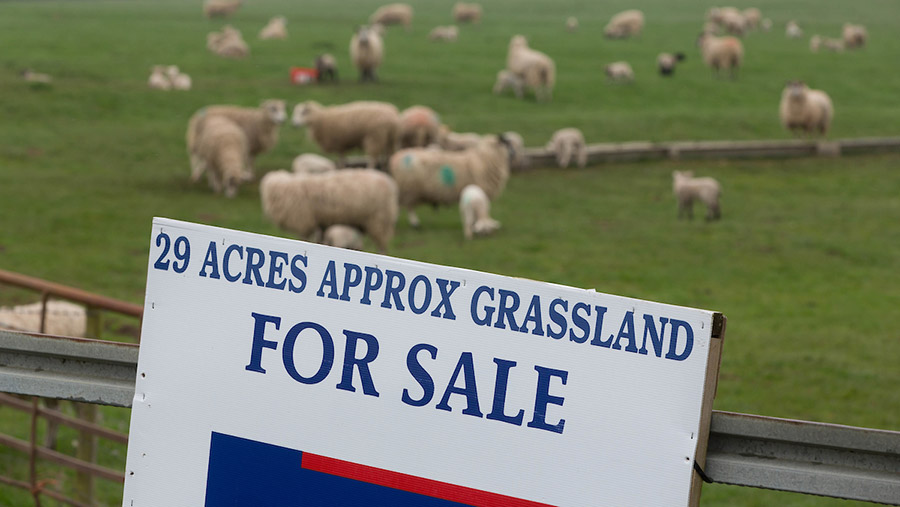 Almost exactly two years ago I wrote in these pages that, in the wake of the EU referendum, farmland prices would fall significantly.

I also pointed out that the self-interested, optimistic predictions of land agents – that prices would keep on rising – were hogwash.

See also: Looking for a farm? Check out our online Property section

The article worked out very well for me in the short term in that it produced a free lunch. One land agent was so incensed by my piece that he treated me to coffee and a sandwich so that he could explain to me, face to face, how I’d got it all horribly wrong.

Apparently there was an insatiable “pent-up demand” for farmland from lifestyle buyers, farmers seeking rollover relief from capital gains tax (arising from development land sales), and other buyers wishing to use farmland’s exemption from inheritance tax.

Prices drop, just not as much

To be fair, he has been proven partly right over the past two years, as farmland prices have not dropped by as much as I had suggested.

He was right that bearish factors, like worries about the viability of UK farming, have been largely cancelled out by the bullish tax-related reasons for owning land that he cited in the first place.

But with the ongoing economic uncertainties created by the prospect of Brexit becoming ever more stark, are we now finally about to witness a land price collapse?

The chances of that happening have surely increased when the likes of Savills are now forecasting that Brexit will slice one-fifth off the value of commercial farms?

Indeed, it goes so far as to suggest that farmland is likely to be the worst hit of all commercial property sectors in the coming years, with values falling even more than high street retail properties, which are being decimated by the growth in online shopping.

If this does happen, what effect will it have on big banks’ confidence in their £20bn loan book to UK farmers?

The vast bulk of those loans is secured against land rather than machinery or livestock. The only thing that is certain is that, if one bank loses confidence, they all will.

Once that happens, it will only add to the downward pressure on land values as more financially exposed farmers are encouraged by their lenders to reduce their debt by selling some land.

Farmers’ confidence in their own businesses is not helped by the type of letter I recently received from a firm of agricultural consultants. It contained an alarming table predicting that, by 2028, my BPS will dwindle to nothing.

The same letter also reminded me that the level of funding for future agri-environmental schemes is still largely unknown.

BPS and HLS are the financial backbone of my Grade 3 downland farm and that is without considering the likely negative financial effect on my sheep, beef and grain enterprises of changes in UK food trade tariffs post Brexit. (Michael Gove’s recent attempts at making vague reassuring noises about future UK food import tariffs at NFU 2019 brought me little comfort.)

Of course, it remains to be seen what will happen to the value of farming’s main asset in the coming months if Brexit does happen – which still looks likely.

But at least I feel a little less isolated, now that one of the UK’s leading firms of land agents has joined me with its own dire farmland price prophesies.