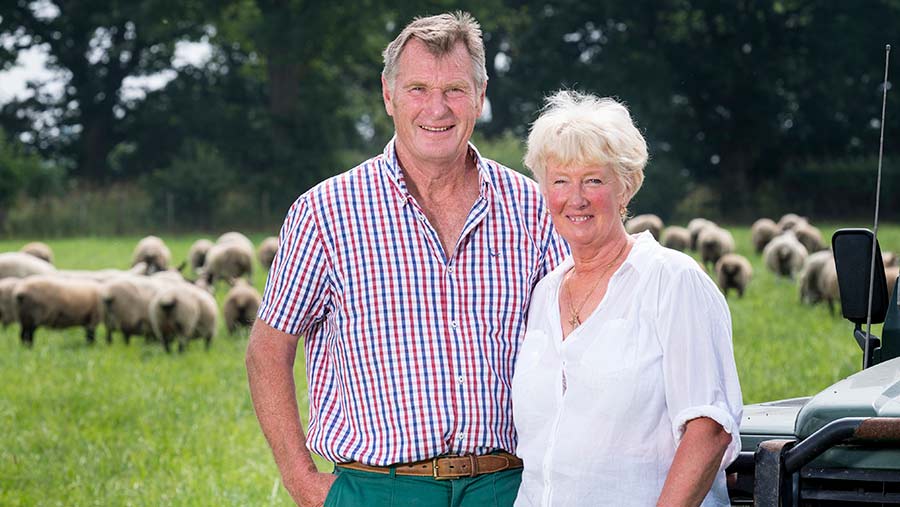 A smug, self-satisfied hen, foolishly clucking that she has just laid an egg and emerging from the depths of a stack of straw, always sets me off on an egg hunt. Will they never learn?

On offer in the two hen huts are perfectly comfortable nest boxes, luxuriously lined with straw, ensuring privacy for them and a known egg collecting depot for me.

At least, that was the plan. A month ago, I was certain that John had solved the problem of errant poultry laying wherever they fancied by creating a chicken gulag. A secure environment for egg production.

However, egg production rapidly diminished over the weeks as the hens went on strike, I assume protesting at the withdrawal of their foraging and access rights to the fields round their hen huts.

So now they are all allowed to roam free once more and, within days, have started laying again – and most of them in the previously shunned egg boxes.

There remains the occasional rebel. A hen standing up for the right to lay wherever she fancies, like on top of a straw bale, in a flower trough or, strangely, precariously balanced on a shed-window ledge. I can stand these al fresco arrangements, however, for the benefits of increased egg production.

Meanwhile, I am packing for an autumn break next week in the Highlands, where John has a regular deerstalking trip.

As a fair-weather walker I am putting in a variety of cold-weather gear to ensure that only the minimal amount of me is exposed to the elements.

Last year, an early fall of snow had brought the stags down off the mountain and they regarded my amblings along the track with only mild curiosity.

Extremely woolly Cheviot sheep, with much thicker fleeces than those of the Texels and Suffolk crosses of our flock, grazed the hillsides with a blithe disregard for fences. Much like the deer, I noticed.

These ewes were all crayoned on the back of their necks – presumably as a mark for the shepherd. Our sheep have always been crayoned on their rumps after being served by the tups. But maybe sheep have a different way of doing things in the Highlands.

The beginning of November is romancing time for sheep in our part of the world. Time to take the tups in to the ladies.

Lust among sheep must be a many-splendored thing at this time of year. The possibility of cold driving rain and blustery winds would not be much of an aphrodisiac for me. Or even John.

Well maybe a few years ago, but now one definitely prefers one’s home comforts. Generally, though, the action goes thus at the start of the big sheep love-in on this farm.

The ewes will look up from their grazing to gaze blankly in the direction of the Land Rover and trailer as it drives into their field. And resume eating. “Come on,” John will whoop. “Cmmmmmmmooooooooonnnn.”

The ewes display a keener interest and, as an (empty) bag of sheep nuts is wafted appetisingly out of the window, the vehicle is quickly surrounded by a horde of anticipatory sheep.

We kick our way out of the Land Rover, through the flock, and lower the back of the trailer onto the heads of a group of more persistent ewes.

Next, a couple of very randy tups shoot out of the back of the trailer, hellbent on instant procreation with anything wild, woolly and female. I get back in the Land Rover very smartly.

Far more threatening, though, than all these amorous sheep are the attitudes of many drivers to agricultural vehicles on main and country roads.

There seems to be a very low level of tolerance of tractors, especially those towing trailers or attached to tackle.

This morning John wanted to take our 3m wide combination drill into Murton where an agricultural machinery sale is held once a month.

The sales are held in a field sited next to the main auction centre. There is also an abattoir on the site, so the immediate area, which is on the outskirts of York, does act as a magnet for any number of cumbersome – admittedly slow moving in comparison to your average motor car – vehicles.

The plan was that I would drive ahead on the narrow lanes around the farm to warn oncoming vehicles to dive for the verges and then, once we were on the main roads, to accompany John to the sale ground.

Traffic was light in our area, but very busy on the main road into York and John quickly acquired a long tailback of frustrated drivers.

We did pull off the road twice to try to alleviate the hold up, but then struggled to rejoin the line of traffic.

What surprised me was the risks drivers would take to get past, narrowly missing a severe paintwork scraping as they squeezed their car past in the minuscule gaps of oncoming traffic.

I also was taken aback by the horn-blowing, hand gestures and fist-waving. Very low levels of tolerance, I thought.

Safely back home, minus combination drill, I resumed my packing. It is difficult to try to register any sort of priority for domestic tasks if a farm-related job turns up.

“But it’s what pays for the holidays,” I am frequently reminded by my husband.