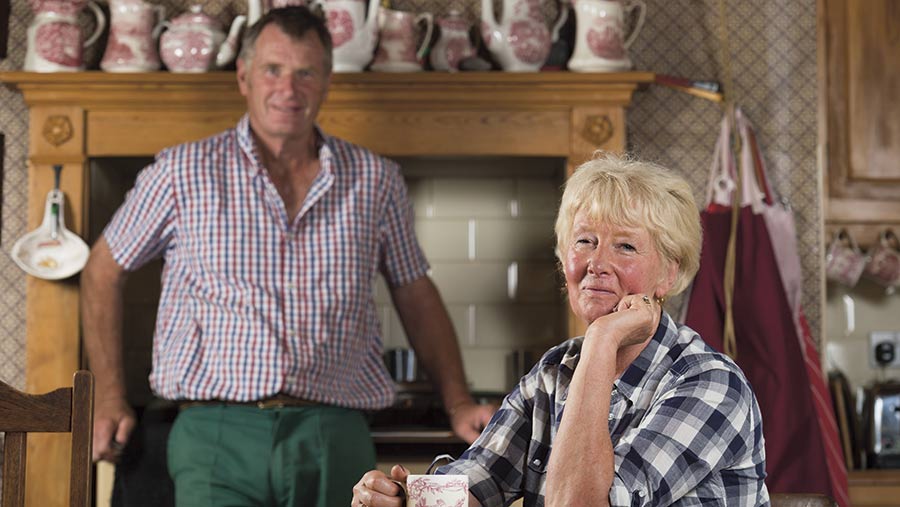 It seems very strange to look across the yard at a set of empty buildings, where once steam from the herd rose up into the eaves on a cold and frosty morning.

Now the sheds echo to the sound of rather cross chickens that no longer have a thick bed of straw to scratch in around the cows.

A pile of mini bales is proving a tempting nesting venue for our hens. I am trying to persuade them to lay in the posh new henhouse John has bought me for Christmas.

Not me personally, you understand, although I am sure he will be tempted at times to lock me inside it.

The new henhouse was an exercise to stop me nagging him to patch up the decrepit huts the hens are using at the moment.

So far, since the actual completion of the farm sale last month, much of our time has been spent sorting things out in the barns and yards.

The big machinery has all gone, some of it across the world. Who would think that an old combine harvester would find a new lease of life in Africa?Bbut that is where it has been shipped off to.

The attraction of not having the latest computer equipment that needs a lot of technical support and the mechanical capability of being able to keep the whole job running at a fairly basic level far outweighs the sophistication of new tackle.

The big tractors too ended up in Ireland and Spain. Oh, it’s an international life our equipment is leading now.

The decision to sell up has been hard, but with daughters and their husbands in professions far removed from agriculture, it is a realistic one.

“I’m not moving as fast as I used to,” John has commented on several occasions over the past year or so as he once more dodged an awkward cow or bad-tempered bullock. “Sooner or later I am going to get hurt.”

Hopefully we can enjoy many years of retirement, or as John sees it, an extended holiday spent fishing and shooting. Hmmmm.

In the past year or so John has also become as interested in carving as calving – wood that is, not meat. Many of our friends take a stick with them when beating on shoots, which now feature his signature duck’s head carving.

And I note he has been accepting requests to help out on friends’ farms at busy times of the year, so I confidently expect the Land Rover will be taking him out of the yard on rural excursions at regular intervals.

Life will be different, but we have had many big changes in our lives, the most significant of all being when we went out of milk.

Before then our day was really ruled by routine and I can even remember on our wedding day we had to return from our three-hour honeymoon walking round Fountains Abbey to get back to milk. No-one can say I didn’t know what I was getting into marrying a dairy farmer.

Even Christmas day was ruled by the milking parlour. No let-up at all.

Christmas and new year seemed to go on forever and I found the festive cheer was best served by Christmas spirits. Lots of them.

At the stage where pre- and post-lunch drinks would have rendered me more garrulous than usual, John could be heard hoping a hammer was in the next cracker I pulled. Or possibly a gag.

In my defence, washing up and cooking for friends and family when we could not stray far from the farm because of the demands of milking time had to be made fun, otherwise they would become a chore and take all the sparkle out of the occasion.

When it all became too much, he had the excuse of checking on the sheep, attending to a calf or just going to look at a cow.

If we were out, a selection of farming priorities could always be relied on as the necessary reason for us to leave at least an hour earlier than anyone else was even thinking of getting in their cars.

I did come up with a range of strategies to stop looking in John’s direction, otherwise he would be rolling his eyes and cricking his neck towards the door like a man with an overactive imagination.

“Got to get up for milking, feeding round, drilling, clipping the sheep, haymaking, swathing the rape, spraying the beans off.” You name it, I have heard them all when John’s bedtime called.

Now he has no excuses at all. A hedonistic lifestyle stretches out before us. Wonder how long it will be before he is back on a tractor again?

Bobbi Mothersdale and her husband John own the 81ha Lowther Farm near York. They have a suckler herd, a flock of sheep and arable crops. Two daughters, three grandchildren, three dogs, assorted poultry, an overgrown garden and country pursuits also take up their time.